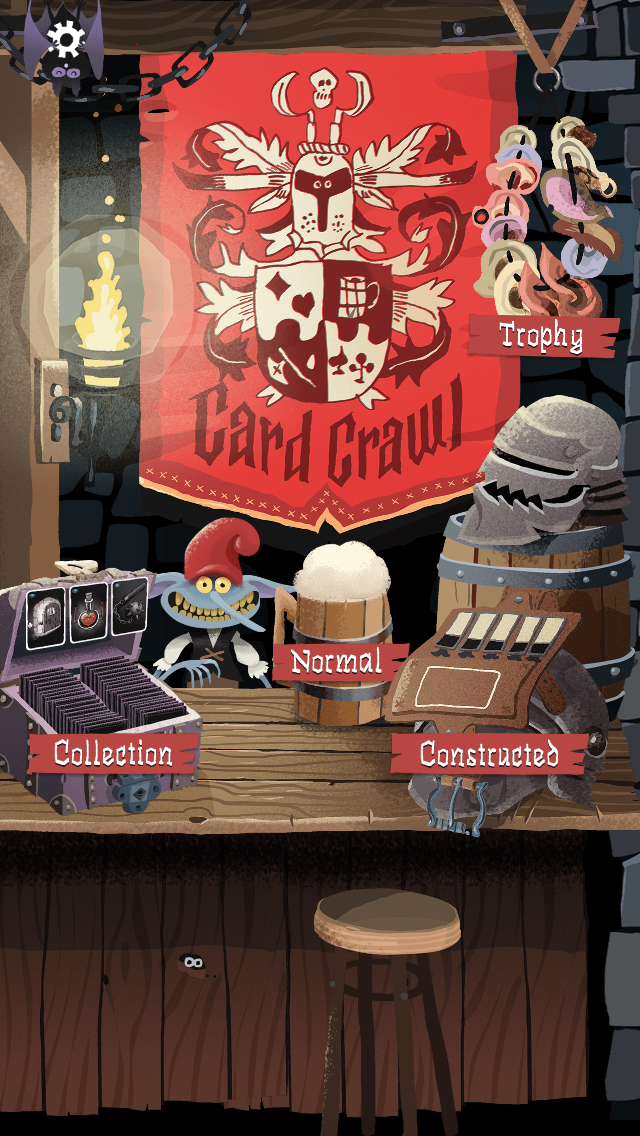 In Card Crawl, developer Arnold Rauers has created an eclectic mix of games that don’t immediately sound like they would fit well together. With the bones of a simple game of solitaire and some heavy inspiration from Dungeons and Dragons, Card Crawl is just strange enough to warrant a closer look.

The idea behind Card Crawl is actually an extremely clever framing device. Players take control of a seemingly bored tavern patron who gets swept up into a game of chance presided over by another customer. The actual card game takes place on a single table within the tavern, with the protagonist trying to navigate a deck of dangerous enemies and mountains of treasure.

From the second you boot up Card Crawl, its amazing art and charming attitude are on full display. The attention to detail is stunning, with tons of great little touches, from a d20 in one corner to a bug crawling along the ceiling. The cards all have amazingly detailed art as well, and it’s worth mentioning that your character card art will change to reflect how close to death you are. All of these things create the feeling of a living, breathing world.

That feeling is carried into every action you take in the hub world. For instance, you have to physically drag keys into locks to unlock cards, and, in order to organize your constructed deck, you have to drag the cards into position. These realistic movements tie in with the music, sound design, and art of Card Crawl to create a surprisingly immersive experience. 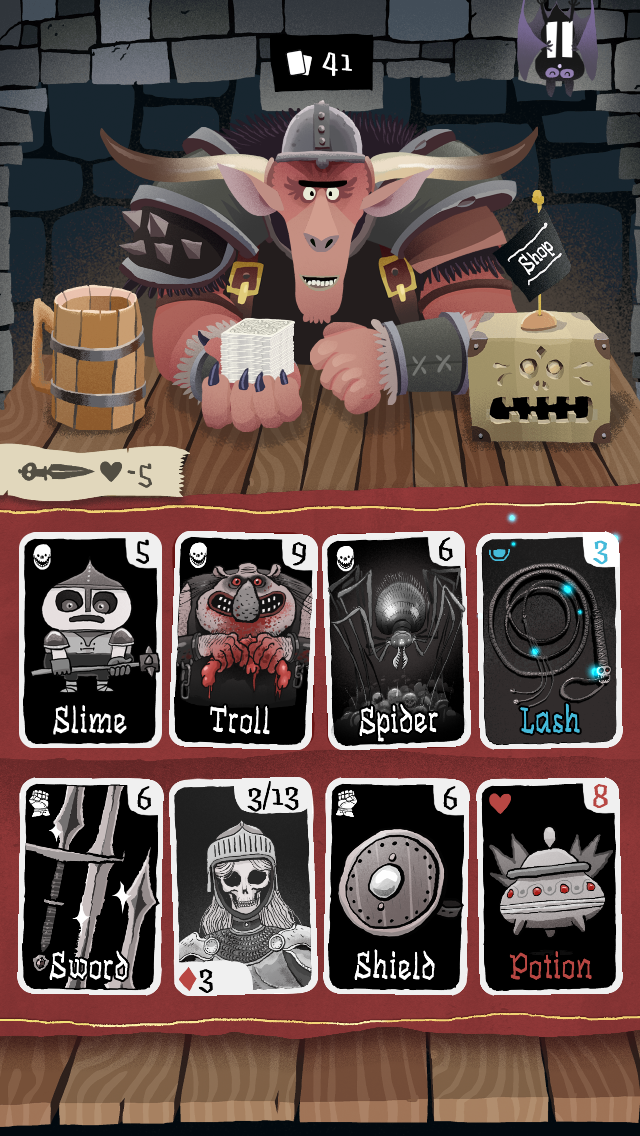 Card Crawl is a deceptively simple concept with a surprising amount of depth. The goal of the game is to safely traverse a Dungeon Deck of 54 cards while collecting as much gold as possible. The game takes place on an eight square grid, with four zones on top and four on bottom. The player begins with thirteen health, represented by a character card that resides at the bottom of the screen. Accompanying the character card are two equipment slots and a backpack for storage.

The four squares above the character are always filled by four of the remaining cards in the Dungeon Deck. All of these cards have numbers associated with them ranging from two to ten. Each card will only preform its function up to the indicated number. Enemies will lower your life, swords will damage enemies, shields will absorb damage, and potions will heal your character. To further complicate matters, the game has skills that the player can use to bend the rules. In order to use any card, it must be equipped in one of the hands. New cards are dealt from the deck when only one card remains in the top boxes. It really isn’t as complicated as it sounds, and the short five minute tutorial does a great job of guiding you through the basics.

The controls themselves are very stiff, and the cards are extremely particular about where they can be placed. In order to move a card, you must hold it exactly over the desired location. Anything less than that, and the card will fly back to its original position. This can lead to a few frustrating attempts to get the game to do what you want, but it was obviously done to prevent accidental placement. In a game where one false move can end an otherwise promising run, I think this is a great solution. I would much rather have to repeat an action every once in awhile than have my character suffer a “cheap” death. In my entire time with the game I never once had a card move to the wrong spot.

A large component to Card Crawl is luck due to the random nature of being dealt cards. While this could be a drawback, it is actually the point of Card Crawl. Overcoming luck because of a sound strategy is great fun, and the reason I keep coming back to this game even after beating it.

You get absolutely nothing for a failed run. If your character card’s life dips below zero you won’t see one single gold. When coupled with the game’s reliance on the luck of what you are dealt, this can end up being a little frustrating. It does, however, add a great deal to the tension of the game. It creates a very real sense of risk and reward since you instinctively want to sell items for gold, but will reap no benefit at all if your hubris eventually causes you to fall in battle.

It will take you about seven hours to unlock all of the abilities Card Crawl has to offer. After that, there is a little replay value to be found in some well thought out and challenging achievements. Add to that the global and local leaderboards, and you have a tremendous value for the asking price of $1.99.

Card Crawl is a perfect game for the mobile market. Individual runs are short enough to be perfect time killers, while the depth of the game’s strategy can provide hours of solid entertainment. The graphics, sound design, and music all make Card Crawl a joy to play, and the overall attitude is lighthearted and fun. I highly recommend picking this game up if you have even a passing interest in the puzzle or strategy genres. Download Card Crawl in the App Store.

This game could serve as a gateway to more advanced strategic Collectible Card Games such as SolForge. SolForge is free to check out, so it might be worth a look if those aspects of Card Crawl tickle your fancy.