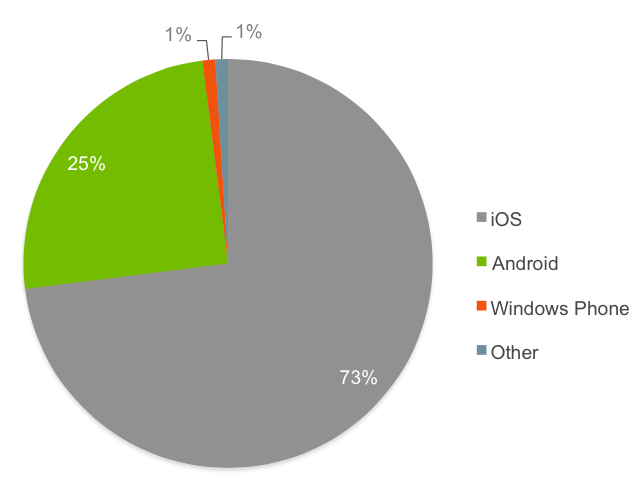 Thanks in no small part to strong sales of the iPhone 6 and iPhone 6 Plus smartphones, Apple has been able to extend its enterprise lead over Android during the fourth quarter of last year.

According to the new Mobility Index Report data (PDF download) by research firm Good Technology, iOS activations in the enterprise market jumped from 69 percent in the third quarter of last year to 73 percent during the last three months of 2014, while Android activations fell from 29 percent to 25 percent.

Windows Phone and Microsoft Surface activations remain consistent with the six previous quarters and made up one percent of total device activations, the report said.

“The smaller form factor of the iPhone 6 continued to prove more popular than the larger iPhone 6 Plus,” according to the report. Specifically, 77 percent iPhone 6 devices were recorded among the iPhone 6 family activations versus 23 percent of iPhone 6 Plus handsets.

“This was a shift from Q3 where 85 percent of the devices were in the smaller form factor,” said Good Technology.

Looking at Android activations, Samsung was the most popular device vendor, with its various handsets making up nine of the top ten Android models, including the most popular Samsung S4 Mini, followed by the Galaxy S4 and Galaxy S5 models.

The survey attributes this to Android’s malware and security issues and fragmentation. Good analyzed activations, by month, among all its global customers that had at least five activated devices over the quarter.

BlackBerry devices were not reflected in this report.

In addition to consistent enterprise mobility management, the program includes work profiles separate from personal data, a new Android for Work app, Google Play for Work as a venue to deploy enterprise app to mobile workers and a set of enterprise-ready business apps for email, contacts and calendar with support for Exchange and Notes accounts and editing capabilities for documents, spreadsheets and presentations.