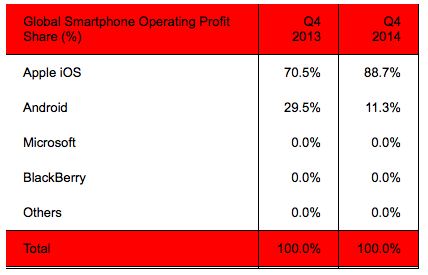 The latest indication that even with its minuscule share of smartphone units sold Apple is clobbering everyone when it comes to profits came Thursday via research firm Strategy Analytics. The research company reported that the Cupertino firm took home an astounding 88.7 percent of operating profit share in smartphones during the fourth quarter of last year.

This is no doubt the effect of strong sales of Apple’s well-received iPhone 6 and iPhone 6 Plus handsets. Android, meanwhile, has fallen to a record-low eleven (11.3) percent.

Just a year ago, the iPhone had a 70.5 percent share of smartphone profits while Android captured 29.5 percent so the Apple smartphone actually stole a whopping 18.2 percentage points from Android in just twelve months. 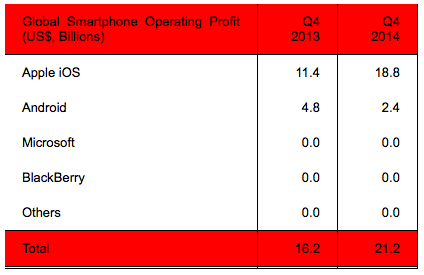 Apple’s 88.7 percent profit share translates to about $18.8 billion out of the aforementioned $21.2 billion figure. Those numbers include only hardware profits and exclude sales of apps, media and services.

As for Android, all handsets powered by Google’s mobile operating system shipped during the last three months of 2014 earned just $2.4 billion in operating profit.

I don’t think major Android vendors like Samsung or Huawei “may be tempted in the future to look at alternative platforms such as Microsoft, Tizen or Firefox” because they cannot make decent profits from the Android ecosystem, as Strategy Analytics opined.

That being said, it’s now clearer more than ever before that Apple has remained king of the hill in terms of smartphone profits, especially with everyone else either reporting losses or eking out an existence.