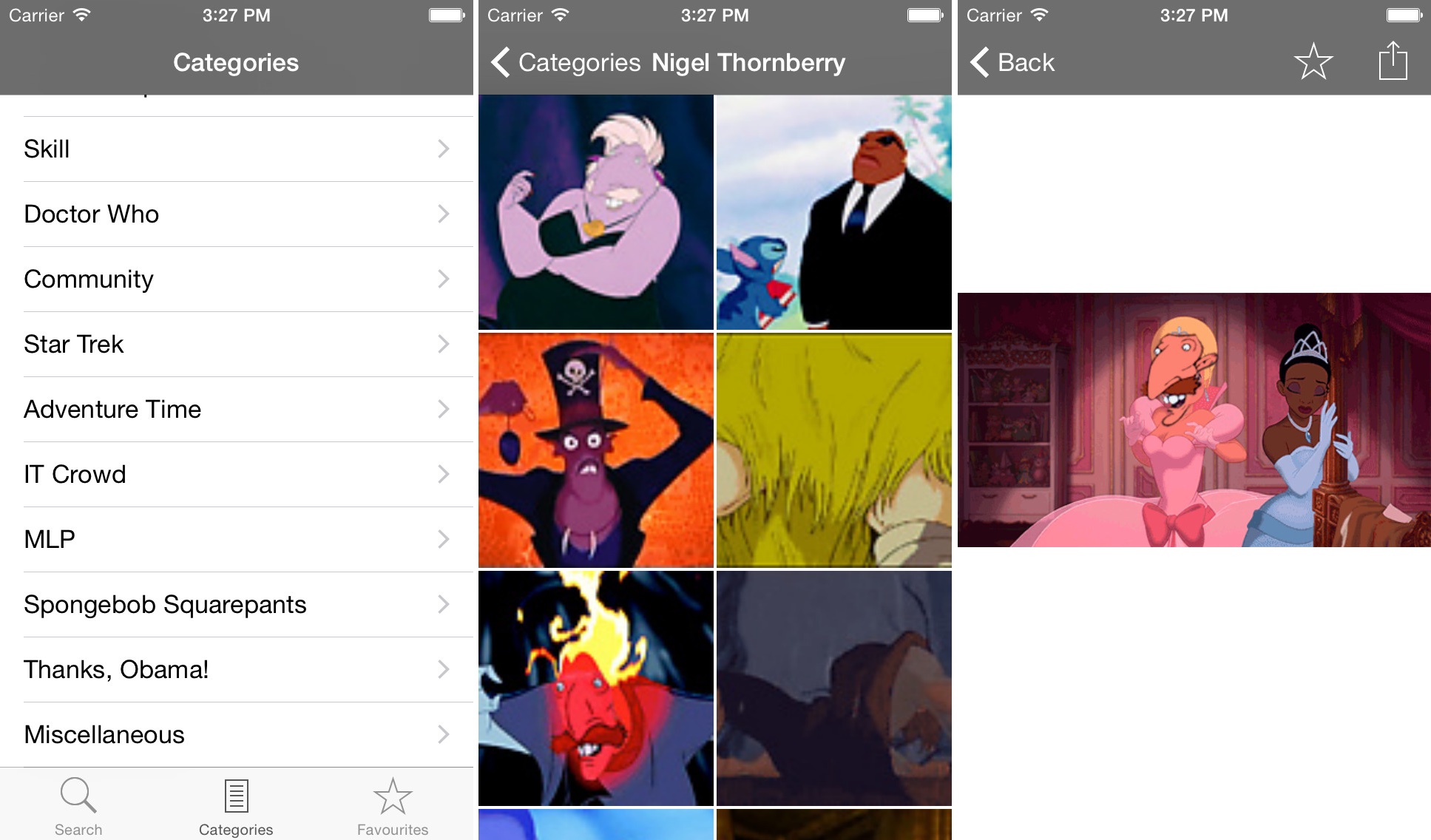 Following its 2012 debut and 90,000 downloads later, GIF Finder for iOS is no more. As of now, the free app is no longer available in the App Store.

According to its UK-based developer Matt Cheetham, Apple took issue with the software, which takes the pain out of finding GIFs to reply with quickly on iOS, because it included “content or features that resemble various well-known, third-party marks, including Disney characters.”

GIF Finder was designed to help users search for GIFs from Tumblr, browse categories of GIFs from the reaction GIFs Imgur archive, favorite them, share them via social media and more.

For the sake of clarity, I should point out that Disney CEO Bob Iger is on Apple’s Board of Directors and that late co-founder Steve Jobs became Disney’s largest individual shareholder after selling his animation studio Pixar to the Mickey Mouse house.

The company asked the developer to please provide documentary evidence of rights to use this content. As he had no control over what GIFs users searched for in GIF Finder and of course couldn’t have obtained written permission from Disney to show its characters within the app, the update wasn’t approved.

He appealed the decision and tried explaining twice he did not own the images, to no avail. “We are not able to accept third-party related applications, for example with Disney or BBC content, without authorization from the rights holder,” reiterated Apple.

“It would be appropriate to remove those categories and images,” suggested the firm’s App Store review team.

“Apple appears to misunderstand how the app works,” Cheetham wrote on Twitter, adding “I can’t see how the it’s any different to the Tumblr app itself.”

He voluntarily removed GIF Finder from sale and called the project dead. It’s going to be interesting seeing whether this is an isolated case of an overzealous App Store reviewer or if Apple is in fact going to banish other great GIF-finding apps available on the App Store.

Shortly following the introduction of Apple’s bigger iPhones last September, Cheetham updated GIF Finder with support for the new iPhone 6 and iPhone 6 Plus resolutions while adding an overhauled GIF engine and other perks.

There have been many instances of app rejections over serving online content that the company found objectionable or cited legal reasons, and this is one of them.

That doesn’t make it any less confusing thought.

I know Apple wants complete control over the user experience and it goes without saying that the restrictions in its agreement with third-party iOS developers extend to external content.

I mean, these GIFs are also available through Safari. Maybe Safari should be rejected as well?