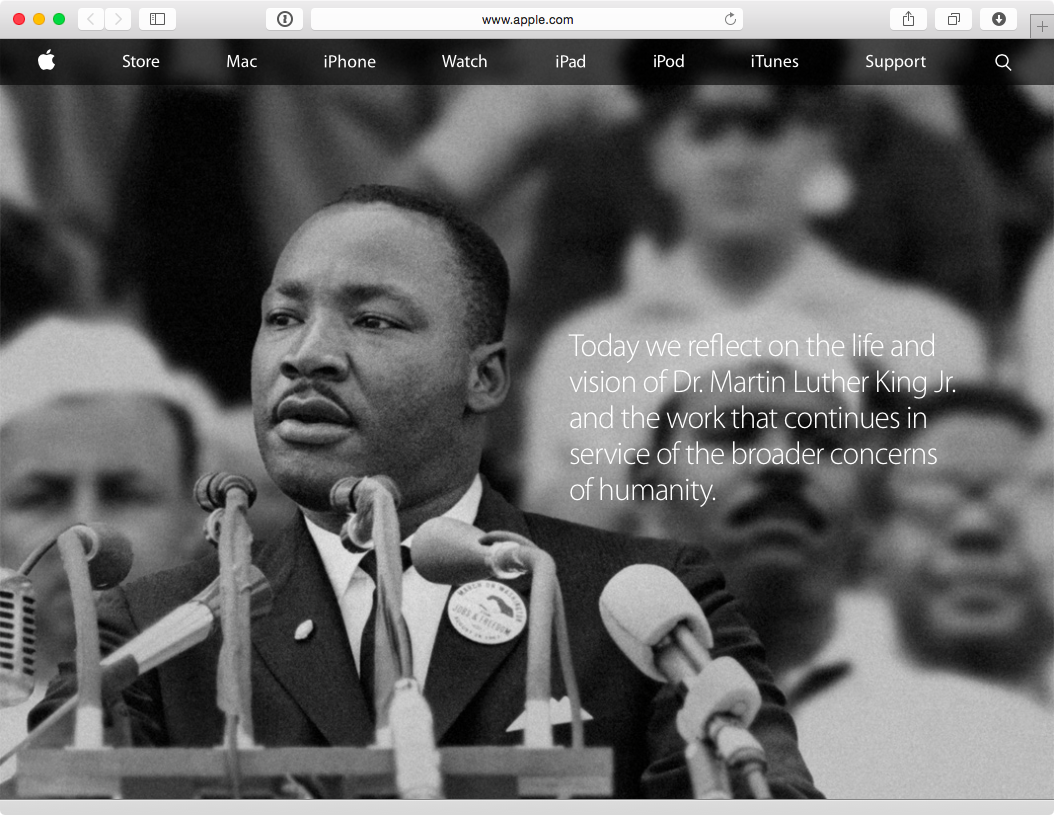 Apple is celebrating Martin Luther King Day with an appropriate graphics on its homepage.

Furthermore, the company is encouraging its employees, who did not get the day off on Monday, to volunteer and promised to donate an additional $50 for every voluntary hour worked by employees.

This is actually part of the iPhone maker’s gift matching program that was put into effect by Steve Jobs’s hand-picked successor Tim Cook shortly after he became the CEO in late-2011.

As you can see for yourself, the Apple.com homepage is completely dominated by a huge photograph of Martin Luther King in observance of the holiday.

The image is accompanied by a line saying “Today we reflect on the life and vision of Dr. Martin Luther King Jr. and the work that continues in service of the broader concerns of humanity.”

In addition to the graphics, only the top navigation pane leading to specific product hubs is shown on Apple.com. Product thumbnails at the bottom, as well as a rotating carousel of latest products, have been removed temporarily.

Martin Luther King Day is a relatively new federal holiday in the United States. Held on the third Monday of January, it celebrates the life and achievements of America’s influential civil rights leader who is known for his campaigns to end racial segregation on public transport and for racial equality in the country.

Martin Luther King Day promotes equal rights for all Americans, regardless of their background. Apple CEO Tim Cook said on multiple occasions that he keeps photos of Martin Luther King Jr. and Robert Kennedy on his desk.

“I had the — just tremendous respect for both of them, and so I do,” he said. ”I look at them every day because I think for people — there’s still too many cases in the world and in the United States where there’s a class kind of structure or where voting or people are trying to convince each other that this other group of people don’t deserve the same rights. And I think it’s crazy, I think it’s un-American.”

#MLK:There comes a time when one must take a position that is neither safe nor politic nor popular but he must take it because..it is right.

Apple under Cook’s leadership has notably increased its donations to charity.