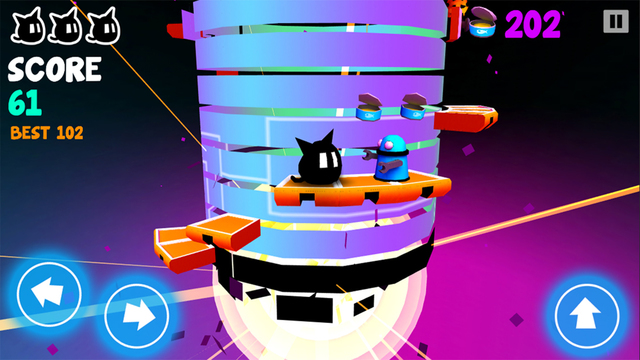 The instant I saw Spirefall I fondly remembered Nebulus, a 1987 platform game for the Commodore Amiga and other home computers of the time in which your character must walk all around a cylinder-shaped tower that has ledges on the outside.

Created by Pixel Hunter Games and released by Gameblyr, Spirefall has your character, a cute cat, moving left or right in such a way that it always stays in the centre of the visible screen because the spire turns clockwise or counterclockwise with a convincing sense of depth — again, much like in Nebulus.

You must bounce off the spring boards and avoid traps like flame throwers, sharp spikes, little robots, crushing hammers and collapsing platforms. 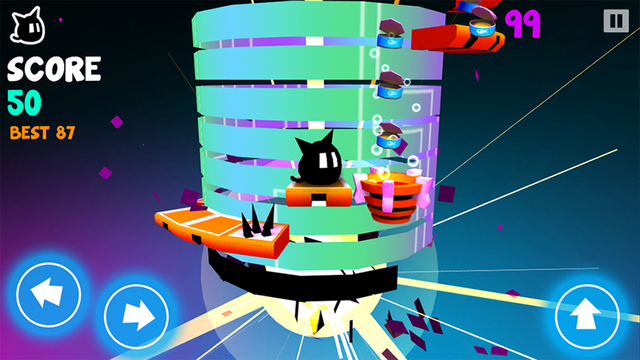 The goal is to jump your cat up the spire before it falls out from under you while collecting food cans and scoring points along the way. Watch the Spirefall launch trailer below featuring a catchy 8-bit retro tune.

The endless jumper features a procedurally generated tower so no two gameplays are exactly the same. The freemium game sports In-App Purchases to remove ads and obtain additional food cans.

Or, you can also ask a Facebook friend to send you extra food cans.

Your cat has three lives, so you’re going to need as many food cans as you can collect in order to continue from your last play.

Grab Spirefall for free in the App Store