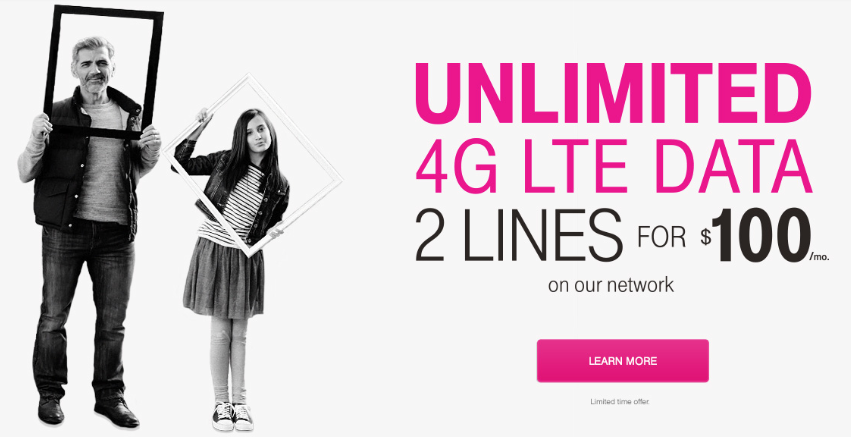 T-Mobile USA, the self-proclaimed “Uncarrier,” on Wednesday launched a new family plan promotion which starts at $100 per month for two lines with unlimited 4G LTE data (2.5GB per line with no sharing required), with an additional $40 per line cost on up to ten people.

Additionally, the Deutsche-Telekom owned carrier is again offering four lines for $100 with ten gigabytes of 4G LTE data. That particular offering used to be available before and has grown to become T-Mobile’s most successful promotion.

The deal has no strings attached to it and comes with the carrier’s usual perks like no annual service contracts or domestic overages, unlimited talk and text, unmetered music streaming on T-Mobile’s nationwide network plus unlimited data and texting in 120+ countries and destinations, Wi-Fi calling and free in-flight messaging.

“Your family will get the extra data until 2016 starts, and after that, you’ll still get 1 GB of 4G LTE data per line,” said the firm. “And, as always, you’ll never face domestic overages when you use more data.”

Check out the price comparison chart below.

As is his wont, T-Mobile CEO John Legere slammed competition saying rivals AT&T, Sprint and Verizon are confusing costumers this holiday season with as many as 24 different family and promotional rate plans.

Citing its own survey, the carrier claims that 81 percent of surveyed customers have found these wireless data offerings as ‘Somewhat Confusing’ or ‘Very Confusing’.

“Right now we are in a great spot,” Legere told Re/code commenting on the new unlimited family plans. “Unlimited is what customers want and need right now,” he said.

Touching on the subject of Verizon’s profit warning, the CEO said he wasn’t surprised that Verizon’s earnings are slipping given the company’s many promotional offers.