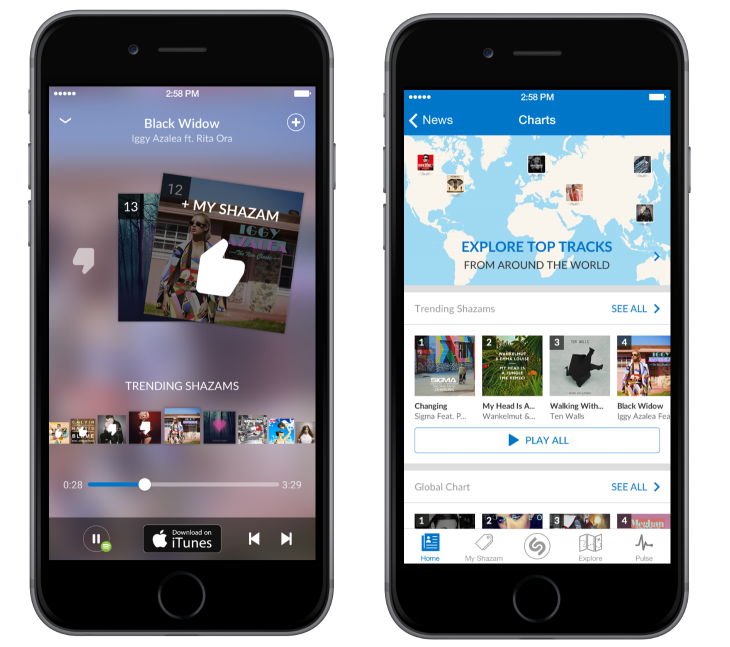 The popular music-identification service Shazam on Wednesday issued a major update to its iOS client adding richer Spotify integration letting you listen to Spotify songs without leaving Shazam and automatically add Shazamed tracks to a specific playlist, an in-app player allowing you to quickly listen to the Shazam charts, a new Shazam Counts feature which displays how many Shazams each track has and more.

“Song releases, video premieres, exclusive Shazam sessions and interviews, plus breaking news from artists you have previously Shazamed – all front and center, the second you open the app,” boasts the company.

According to the firm’s blog post and media release, Shazam hopes a new version of its app will have you sticking around longer. The new built-in music player allows you to check out Shazam charts, trending songs and your recent Shazams.

Just swipe right to add a track to My Shazam or swipe left to move on to the next track.

Check out the new in-app music player below.

And, you can now add your Shazams to any playlist and find them saved to a “My Shazam Tracks” playlist in Spotify or Rdio. Like before, Rdio integration with this same functionality is also present in this Shazam update.

In addition to the updated mobile app, a brand new experience awaits you over at Shazam.com, including the Hall of Fame which celebrates artists who have had outstanding success on Shazam and Shazam Counts.

“For the first time, Shazam now publishes the number of Shazams each track has had on Shazam.com,” note the firm.