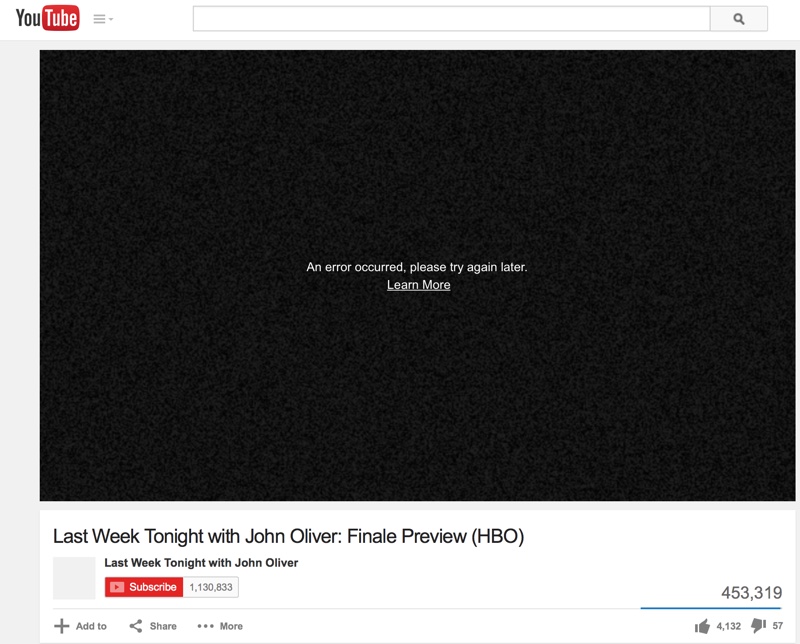 According to user-submitted posts over at both Apple Support Communities and Google Product forums, an unknown portion of Mac owners who run Yosemite are having issues playing certain YouTube videos, with some getting Safari crashes when attempting to watch a clip.

It seems to affect some, not all, HTML5 videos and does not manifest itself when using the resource-hog Flash Player, causing Safari to fall back to Flash for video delivery.

Other browsers are unaffected by the annoying problem. Neither Apple nor Google have commented on the matter yet. Digging deeper, it would seem the hiccup could be traced to the YouTube backend because HTML5 videos in Google Chrome and other browsers play without a problem.

“Videos would either switch to the Flash Player, throw an error, make a loud ‘squeak’ noise and throw an error, or just crash the Safari page outright and forcing a Force Reload,” wrote one poster.

I’m inclined to think that Safari could be the culprit here because problematic clips play perfectly when using Firefox 32 or Chrome 38.

Indeed. As MacRumors pointed out, folks on OS X 10.10.0 are also reporting the issue, “suggesting it is indeed a YouTube problem.”

I checked this with Cody and other members of the iDownloadBlog team who haven’t updated yet and they’re also having YouTube issues, which leads us to believe that the problem is on YouTube’s side.

I myself also noticed YouTube hiccups in Safari this morning, but initially dismissed them as a temporary glitch. For those wondering, clearing cookies and caches or resetting PRAM does nothing to fix the problem.

Several posters have suggested changing user agent in the Safari browser to Google Chrome. You can change browser user agent under the Advanced tab in Safari’s Preferences.

First tick the checkbox next to “Show Develop menu in menu bar” and then choose “Google Chrome — Mac” in Develop under Safari’s menu bar. 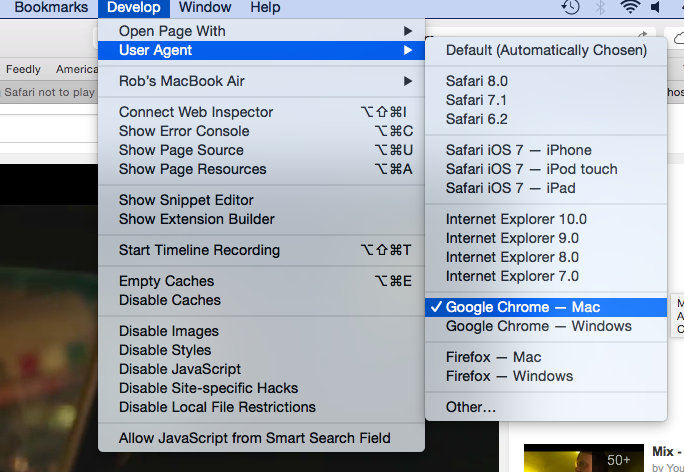 See if this trick works for you.

It appears to be a temporary solution because the problem raises its ugly head when Safari is closed and restarted. At any rate, firing up Chrome solves the problem.

Others have suggested deleting all Site Data and Settings data for Flash Player under System Preferences > Flash Player Settings > Advanced, but the trick doesn’t seem to be working for everyone.

I’m not a fan of Google’s browser because it does not use performance-enhancing, battery-saving Mavericks and Yosemite technologies so it kills my Air’s battery. I also don’t allow anything from Adobe into my workflow.

Nevertheless, I still like keeping Chrome in my Applications folder. As Google’s browser has built-in Flash Player (as opposed to installing it system-wide from Adobe), it lets me watch Flash-only video or interact with Flash sites when needed.

Are you plagued with YouTube woes on Yosemite? Have you found a workaround yet? If so, please share it kindly with fellow readers down in the comments.

The OS X Yosemite 10.10.1 software update improves Wi-Fi reliability of your Mac and includes numerous bug fixes. Surprisingly enough, a portion of users who’ve upgraded continue to report intermittent issues connecting to a Wi-Fi network after waking from sleep, in addition to unreliable connections, slow data transfer speeds, connections randomly dropping every few minutes or so and so forth.