Vainglory, a much anticipated multiplayer online battle arena (MOBA) game that Apple featured during the September 2014 iPhone 6 keynote, launched unexpectedly early and is now available for download in select App Stores, developers announced Tuesday. Created by a team with a rather interesting name, Super Evil Megacorp, Vainglory for the iPhone and iPad is their first game ever but Apple was so impressed they decided to feature the game as a showcase of the graphics power provided by the iPhone 6 and 6 Plus.

Driven by the E.V.I.L. engine, Vainglory renders action in a silky smooth sixty frames per second with as many as 1.3 million polygons in the game map. The game is powered by Metal, Apple’s new low-latency graphics framework in iOS 8.

Due to Metal’s requirements, Vainglory needs iOS 8.0 or later and runs on iOS devices outfitted with Apple’s A7, A8 or A8X mobile processor variants found inside the iPhone 5s, iPhone 6, iPhone 6 Plus, iPad Air, iPad Air 2 and iPad mini 3.

Both the iPhone and iPad editions of Vainglory are free in the App Store.

Vainglory is a typical MOBA game so be prepared for some nice real-time battles involving powerful heroes. The sub-30ms control responsiveness ensures smooth action, no matter the number of opponents or how detailed, colorful and beautifully realized the game world is. 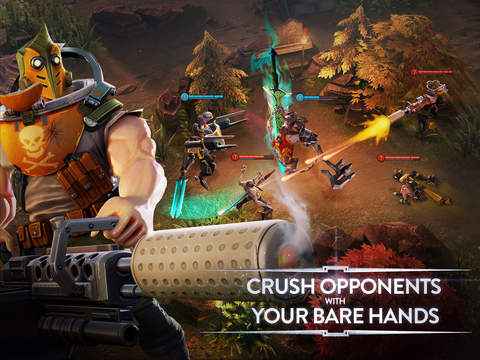 You can take on other real opponents and participate in 3-vs-3 multiplayer battles. Each available hero has unique abilities. Additional heroes are coming in future updates.

Download Vainglory for the iPhone and iPad in the App Store.

The game is currently available the App Store in North America, South America, the Middle East and Africa. Vainglory will be coming to Europe this Thursday, with Japan, China and Korea launches following soon after.

You can optionally buy in-game currency for real cash and use it to unlock new character classes. I should note that developers have implemented In-App Purchases in a fair manner. Upgrades, items and in-game bonuses are unavailable through In-App Purchases and must be instead earned by winning battles.

Another example: some characters will be available to everyone at specific time intervals, which is a nice balance between the player’s desire to enjoy as much content free of charge as possible and the developer’s ultimate goal of monetizing die-hard gamers.