Apple has posted its [fiscal] fourth quarter earnings report this afternoon, announcing that it has sold 39.3 million iPhones and 12.3 million iPads. The numbers are just about as expected, with iPhones coming in a little higher than anticipated, and iPads coming in quite a bit lower.

It’s been a significant quarter for Apple in terms of announcements, as it unveiled two new iPhones, Apple Pay and Apple Watch. It’s worth noting, however, that neither Apple Pay nor Watch were available in September, and the new iPhones were only on sale for the last 10 days.

Here is a breakdown of the numbers, versus what was expected by Wall Street analysts:

“Our fiscal 2014 was one for the record books, including the biggest iPhone launch ever with iPhone 6 and iPhone 6 Plus,” said Tim Cook, Apple’s CEO. “With amazing innovations in our new iPhones, iPads and Macs, as well as iOS 8 and OS X Yosemite, we are heading into the holidays with Apple’s strongest product lineup ever. We are also incredibly excited about Apple Watch and other great products and services in the pipeline for 2015.”

“Our strong business performance drove EPS growth of 20 percent and a record $13.3 billion in cash flow from operations in the September quarter,” said Luca Maestri, Apple’s CFO. “We continued to execute aggressively against our capital return program, spending over $20 billion in the quarter and bringing cumulative returns to $94 billion.” 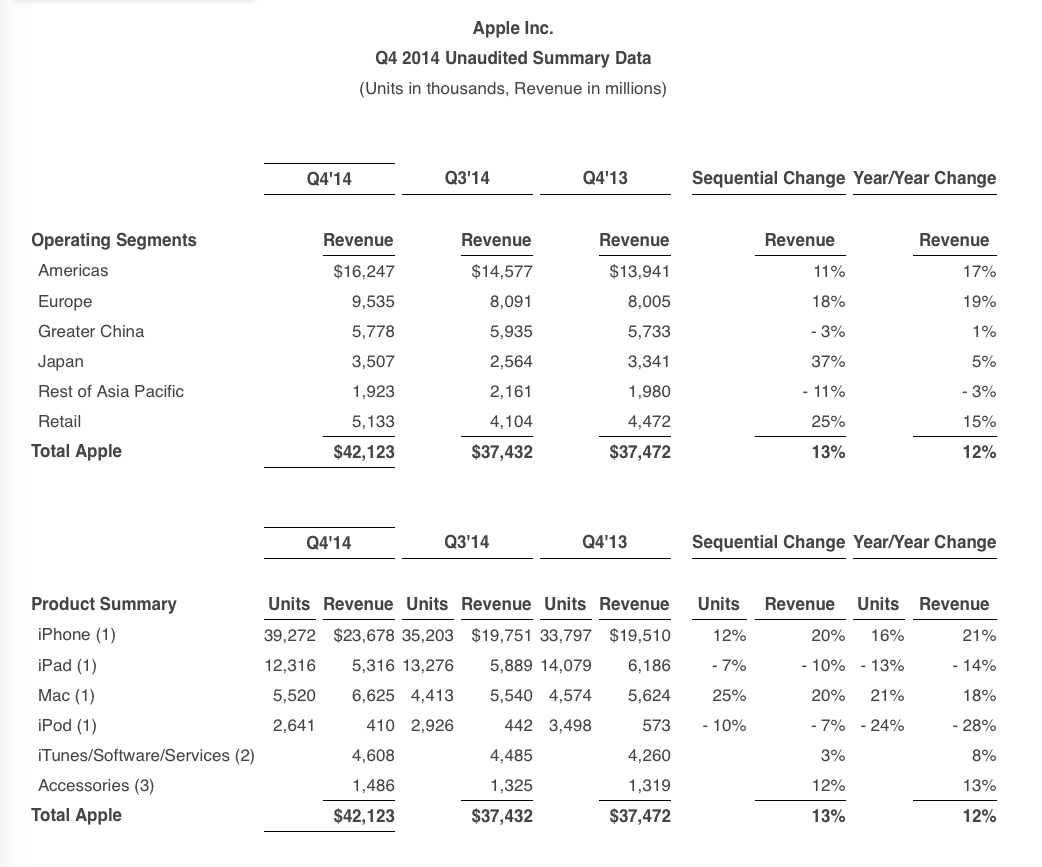 All said and done, this was a pretty big quarter for Apple, with it beating the Street’s estimates in every category except for iPads. And with new iPhones rolling out around the world, and new iPads on the way, the Cupertino firm is setting itself up for a monster holiday quarter.

Apple’s earnings call will start in just a few minutes. If you’d like, you can listen to a live webcast of the call via Apple’s online investors portal. Or, as usual, you can continue to check back with iDB later this afternoon for highlights and commentary on all major announcements.