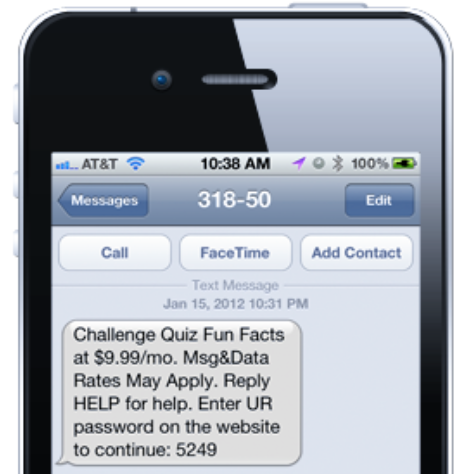 The US government has just handed AT&T a significant fine for allowing third party companies to stealthily tack on their charges to customer phone bills for things like spam SMS text messages. The announcement was made on Wednesday in a joint press conference by the FCC and FTC, who say this is the largest “cramming” settlement in history.

In total, AT&T will pay out $105 million to settle the case—$80 million is earmarked for the FTC, which it will use to set up a reimbursement program, $5 million will go to the FCC, and $20 million will go to individual states. Additionally, the carrier has been ordered to begin proactively informing subscribers if extra fees are going on their accounts.

It’s an unusually large settlement, but it didn’t come unwarranted. During their inquisition, federal investigators found that AT&T made hundreds of millions of dollars by taking a 35% cut of the unwanted charges. Evidence also showed that it was in constant contact with the companies, and very good at dodging customer complaints about the charges.

Here’s AT&T’s statement on the matter:

“While we had rigorous protections in place to guard consumers against unauthorized billing from these companies, last year we discontinued third-party billing for Premium Short Messaging Services. Today, we reached a broad settlement to resolve claims that some of our wireless customers were billed for charges from third parties that the customers did not authorize. This settlement gives our customers who believe they were wrongfully billed for P.S.M.S. services the ability to get a refund.”

For those unfamiliar with the term, ‘Premium Short Messaging Services’ are services setup to send you gimmicky texts like ‘Daily horoscopes.’ Most of them are easy for non tech-savvy users to opt into, difficult to cancel, and cost $10 per month. It’s not just an AT&T-only thing either, early this year the FCC went after T-Mobile over similar complaints.

[FTC via The Verge]