T-Mobile has been aggressively marketing its Uncarrier initiatives to prove that it cares about customers, but the Federal Trade Commission has published a new complaint that accuses the carrier of knowingly cramming bogus charges onto customers’ phone bills for years. The FTC claims that T-Mobile made hundreds of millions of dollars by knowingly placing charges for “premium” SMS subscriptions that, most often, were not authorized by customers…

According to the official FTC complaint (PDF), unauthorized charges often came in the form of monthly subscriptions from third-party merchants, for content like ringtones, wallpaper, horoscopes, flirting tips, celebrity gossip and similar information. T-Mobile typically charged consumers $9.99 per month for these subscriptions, as recently as December 2013.

“The FTC alleges that T-Mobile received anywhere from 35 to 40 percent of the total amount charged to consumers for subscriptions for content such as flirting tips, horoscope information or celebrity gossip that typically cost $9.99 per month,” the FTC writes. “According to the FTC’s complaint, T-Mobile in some cases continued to bill its customers for these services offered by scammers years after becoming aware of signs that the charges were fraudulent.”

The act of third-party billing without customer authorization is known as “cramming,” which is something the FTC has been aggressively fighting over the years. In the last year, it has held a public workshop on mobile cramming and filed lawsuits against mobile cramming operations Jesta Digital, Wise Media, and Tatto Inc. T-Mobile is said to have billed customers for services from each of those three companies.

“It’s wrong for a company like T-Mobile to profit from scams against its customers when there were clear warning signs the charges it was imposing were fraudulent,” said FTC Chairwoman Edith Ramirez. “The FTC’s goal is to ensure that T-Mobile repays all its customers for these crammed charges.”

The confusing billing practises that T-Mobile uses likely contributed to the difficulties in customers tracking these charges, which were labeled as “Premium Services” and buried under a separate heading within the online billing portal. T-Mobile did not distinguish the charges as being part of a monthly, recurring subscription, nor did they enable customers to view the charges individually. 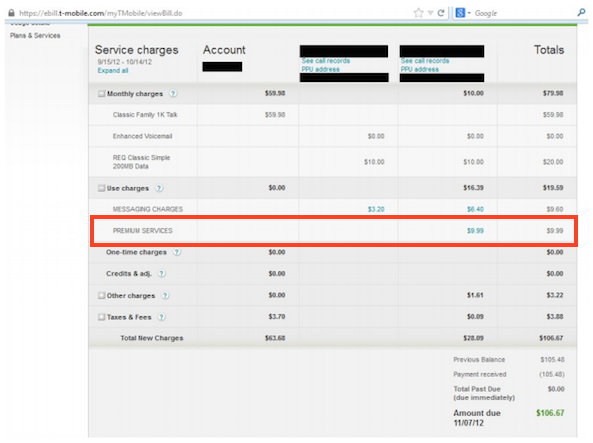 The charges were often vaguely disguised on phone bills with names like “8888906150BrnStorm23918,” and customers that were on pre-paid billing cycles were having these charges withdrawn from their account without their knowledge. The FTC claims that T-Mobile provided some customers with partial refunds, but often times gave none at all.

The FTC’s complaint in the U.S. District Court for the Western District of Washington seeks a court order against T-Mobile that will permanently prevent the carrier from mobile cramming and force it to offer refunds to all affected customers. While the FTC has “reason to believe” that T-Mobile is guilty of these fraudulent actions, it will be up to the court to impose legal sanctions.

We have seen the complaint filed today by the FTC and find it to be unfounded and without merit. In fact T-Mobile stopped billing for these Premium SMS services last year and launched a proactive program to provide full refunds for any customer that feels that they were charged for something they did not want. T-Mobile is fighting harder than any of the carriers to change the way the wireless industry operates and we are disappointed that the FTC has chosen to file this action against the most pro-consumer company in the industry rather than the real bad actors.

As the Un-carrier, we believe that customers should only pay for what they want and what they sign up for.” said John Legere, CEO T Mobile USA. “We exited this business late last year, and announced an aggressive program to take care of customers and we are disappointed that the FTC has instead chosen to file this sensationalized legal action. We are the first to take action for the consumer, I am calling for the entire industry to do the same.

This is about doing what is right for consumers and we put in place procedures to protect our customers from unauthorized charges. Unfortunately, not all of these third party providers acted responsibly—an issue the entire industry faced. We believe those providers should be held accountable, and the FTC’s lawsuit seeking to hold T-Mobile responsible for their acts is not only factually and legally unfounded, but also misdirected.