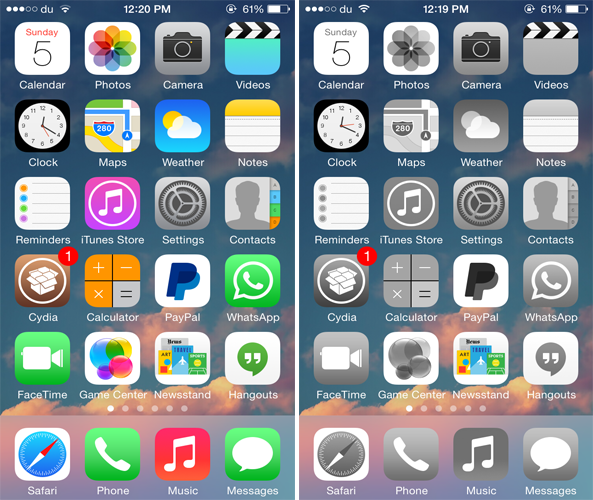 If you ever wanted to bring a classic look to your Home screen icons, you should probably check out a new jailbreak tweak called Monochrome that squeezes out all the colors from the app icons on the Home screen and brings a simplistic look to them.

Developed by Ron Thakrar, the tweak applies shades of grey to all the app icons on the Home screen, just like the classical black and white movies, bringing a more simplistic look to your Home screen. The wallpaper color will remain as is, but if you want to take it a little further, you can use a black and white wallpaper to better suit the grey icons, although it would have been a nice addition if the tweak already came equipped with this feature.

Along with the wallpaper, the app badges will remain unaffected, carrying the default red color.

While the tweak works perfectly with most of the app icons, it fails to theme the Newsstand icon as well as a few other third-party apps, while the icons with black and white colors will remain as is.

Once you install Monochrome, there are no settings to configure and you’re good to go. If you’re interested to give this tweak a try, head to Cydia’s BigBoss repository and install it for free of charge.