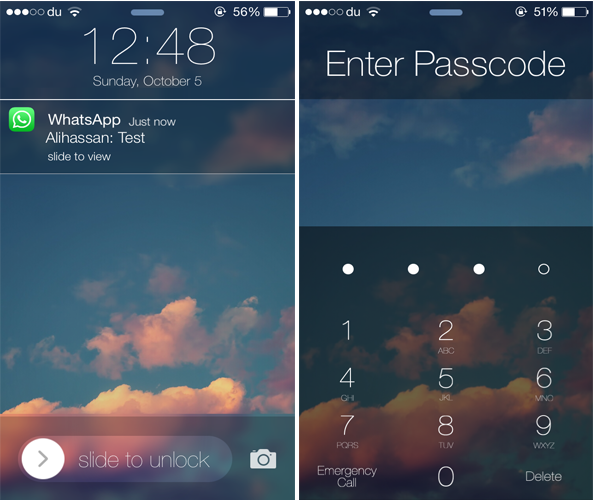 A few weeks ago, we showed you ClassicLockScreen, a tweak by CoolStar and Phillip Tennen that provides over four different styles which you can apply to your Lock screen. Ascend is a somewhat similar jailbreak tweak by Ben Rosen that brings a gorgeous look to your Lock screen.

The tweak brings back the popular iOS 6 Slide to Unlock slider with an iOS 7-esque style along with a blurred background and top bar. Additionally, it gets rid of the round passcode buttons and replaces it with a flatter interface and a transparent background. The same applies to the notifications that appear on the Lock screen.

Ascend also supports a handful of other jailbreak tweaks including Forecast, Stride 2, Convergence and much more. 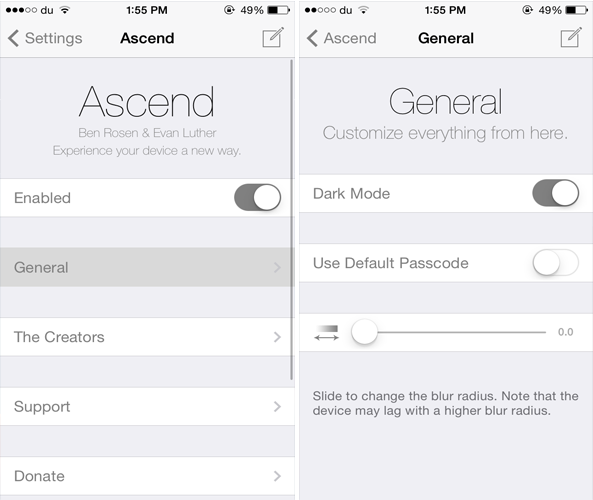 Once you install Ascend, head to its preference pane from the stock Settings app to start configuring it. From there, you can enable or disable the tweak right away as well as enable or disable the dark mode and use the original passcode interface that features round keys instead of the customized one that comes with the tweak. You’ll also find a slider that allows you to adjust the blur radius of the tweak’s elements.

Personally, I find the tweak’s design quite appealing and if I were to choose between Ascend and ClassicLockScreen, I’d go with the former. While the tweak works perfectly without any issues, the only problem I faced is that the ‘Emergency Call’ button on the passcode screen is unresponsive no matter how many times you press it. Other than this, the tweak provides a great experience.

If you’re interested to bring a more elegant look to your Lock screen, you should definitely consider giving Ascend a try. You can get the tweak from Cydia’s BigBoss repository for $1, which in my opinion is worth the price. It also supports iOS 7.1.x devices only, so if you’re running on a lower firmware, then you’re out of luck.

What do you think of Ascend? Do you prefer Ascend or ClassicLockScreen? Let us know in the comments section below.