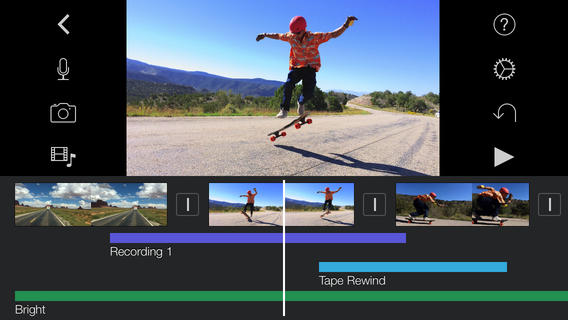 Following its release of iOS 8 this morning, Apple has begun updating its mobile apps to support the firmware. It looks like Numbers and iMovie were first on the list, with both apps showing up in the App Store’s Updates tab today touting iOS 8 compatibility.

The change log for Numbers is fairly brief, mentioning only support for iOS 8, iCloud Drive compatibility, and stability improvements and bug fixes. iMovie’s update, however, is a bit more extensive, bringing about new features like slow motion and video filters.

Update: it looks like Apple has also pushed out iOS 8 updates for Pages and Keynote as well.

Update 2: iMovie was experiencing issue so Apple apparently pulled it from the App Store. It should be fixed and come back quickly.

Update 3: as expected, Apple resolved the issue quickly and iMovie is once again available in the App Store.

Easily my favorite new feature is the new iMovie extension. I’ve owned the app for years now, but have rarely ever summoned the courage (?) to open it. But with extensions, I can take advantage of its advanced editing features from directly within the Photos app.

If you want to check out the updates for yourself, you can find Numbers in the App Store for $9.99, and iMovie for $4.99 (though, both are free with newer iOS devices). If you’re not seeing them yet, check back a little later, as Apple’s servers are getting slammed.