The Status Bar is a handy area of iOS that lets you take a peek at various information such as time, Wi-Fi, battery level, etc, from anywhere on your device. However, Apple restricts users from customizing it the way they want. A new jailbreak tweak known as Protean has been released to get rid of this restriction.

Developed by Elijah and Andrew, Protean adds many new features to the Status Bar and allows you to organize the items in there by positioning them on any side. The tweak also displays the applications that have a pending notification on the Status Bar and allows you to customize flipswitches such as Airplane mode, Auto Lock, etc, and add icons of connected Bluetooth devices.

One of the most interesting features of this tweak is that you can assign an Activator action to each of the Status Bar items. Tap on any of them to open the respective application or launch an associated Quick Reply tweak such as auki. For instance, you can tap on the WhatsApp icon to launch the app or press the Wi-Fi icon to open Vestigo. 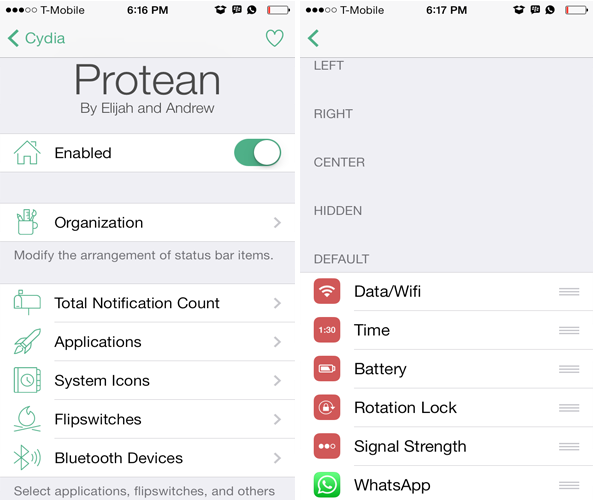 Once you install Protean, a new preference panel will be added to the stock Settings app where you’ll find tons of settings to configure. You can enable or disable the tweak directly from there via the kill switch toggle, and organize the items in the Status Bar from the ‘Organization’ section, where you can place each of them on either the left, center or the right side. Alternatively, you can also hide any item.

You’ll find a ‘Total Notification Count’ option that is supposed to show the total notifications count on the Status Bar along an icon of your choice, but it doesn’t work on my device. It displays the icon only without the total number of notifications.

The tweak also displays the applications with a pending notification. The ‘Applications’ section is where you can choose an icon for each.  The tweak offers over 100 different icons you can choose from. In addition to this, you can also choose what happens when you tap on them. As mentioned earlier, you can assign an Activator action to each, launch a specific app upon touch or open an associated Quick Reply tweak such as Hermes or auki, although this didn’t work properly for me. The same applies to System icons, Flipswitches and Bluetooth devices, where you can choose an icon for each from their own separate section as well as set an Activator action. 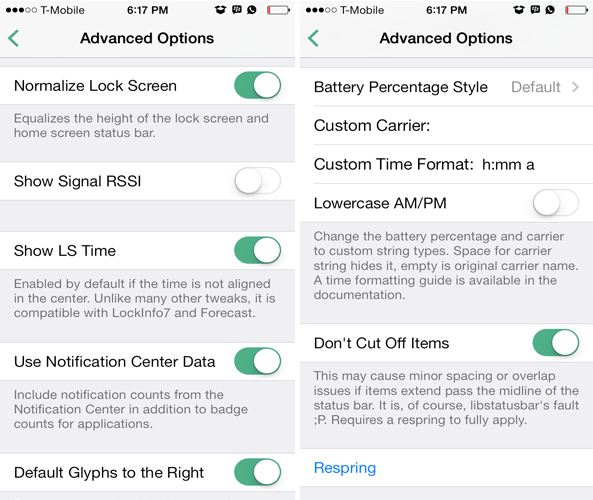 The tweak also provides a ton of ‘Advanced Options’. You can display the signal RSSI, view Status Bar time on Lock screen, default the icons’ position to the right or left and much more.

Protean is a unique tweak and is loaded with tons of features that allow you to take complete control of your Status Bar. However, one of the few issues that I faced while using the tweak is that it doesn’t display the amount of notifications, only the icon is showed. The Status Bar items also start to overlap with the time if too many of them appear. For instance, if you place the battery and the Auto-Rotate lock icon on the left side of the Status Bar, the remaining items such as carrier name or Wi-Fi signal will appear behind the time on the Status Bar. But you can get rid of this by placing the time on a side such as left or right, rather than center. Yet, the major issue of the tweak is that the Quick Reply feature doesn’t work properly.

Other than these, the tweak works smoothly and does its job nicely. If you’re interested in giving Protean a try, you can purchase it from Cydia’s BigBoss repository for $1.99.

What do you think of Protean? Is it something you’d use to customize your Status Bar? Let us know in the comments section below.