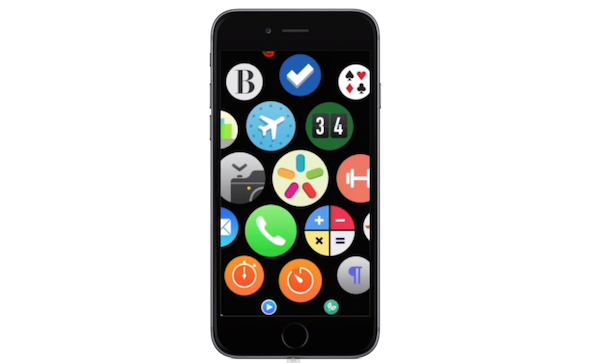 Apple’s announcements of the iPhone 6 and iPhone 6 Plus this week were largely expected, but the real surprises of the keynote came from the Apple Watch, a wearable device with a custom-designed OS. With a home screen filled with a honeycomb-like grid of circular icons and navigated largely by zooming, the Apple Watch is different from anything we’ve seen from Apple in the past.

Following the announcement, Andras Horvath has posted a concept video to his channel imagining what the iPhone 6 would be like if it ran the software found on the Apple Watch. The result is an interface that is surprisingly pleasant and intuitive. Browsing through apps in this manner seems perhaps more appealing than the standard home screen layout of iOS.

Once iOS 8 is jailbroken, maybe we’ll see a tweak that brings this functionality to iPhone. It’s not unreasonable to think that many people would love to use this layout on a screen larger than that of the Apple Watch.