After hovering just under the $100 mark for several weeks, shares of Apple finally surpassed the mark today and closed at an all-time high of $100.56. That breaks the Cupertino company stock’s previous closing record of $100.30, set on September 19, 2012 in the run up to the launch of the iPhone 5.

Today’s news comes just a few months after Apple authorized a 7-1 stock split (before the split, today’s closing price would be shown as $703.92), and amidst a barrage of rumors regarding the company’s plans for product releases this fall which include two new iPhones and possibly a smartwatch… 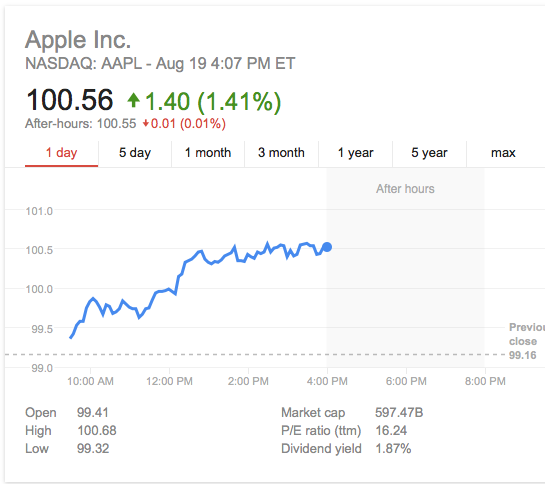 The road to recovery has been a long one for Apple’s stock price, which lost more than a third of its value in the year following the iPhone 5 release (dipping into the $300’s in 2013). Investors worried about the company’s direction and viability without its founder and visionary Steve Jobs at the helm.

But Tim Cook has taken everything in stride. And thanks to a combination of consistent earnings, a major stock buyback program, and the promise of an incredible product pipeline, he’s managed to bring APPL back to its former glory. It hit a high of $100.68 today, flirting with its all-time high of $100.72.

Of course, now he has to deliver on the hype. Apple is expected to host a media event on Tuesday, September 9th to introduce two new iPhones.