The general consensus among watchers and analysts regarding the engine powering the next iPhone(s) is that Apple will use an in-house designed A8 processor (reportedly clocked at 2Ghz per core). And that’s about everything we know thus far about the chip.

We’re still left in the dark as to how many processing and graphics cores the A8 might incorporate and we’ve been certainly wondering a lot about the amount of the chip’s RAM. According to a leaked schematic, the iPhone 6 will remain stuck with the same 1GB of RAM as past three models…

Update: As noted in MacRumors forums, the drawing references DDR and NAND, which could suggest that “it more likely refers to some aspect of the device’s flash memory rather than DRAM included within the A8 chip”.

Furthermore, the PN65V model number seen on the technical drawing seems to the PN65 component by a company called NXP, which is basically a Near-Field Communication (NFC) chip for mobile devices.

That’s according to an alleged schematic posted on Weibo by Chinese Apple repair firm GeekBar [Google Translate] and relayed by GforGames.

Though GforGames noted it was unable to confirm veracity of the rumor, the publication underscored the source’s credibility:

We should also note that, in the past, GeekBar has been an active source as far as leaking pics depicting internal Apple hardware components, indicating that the source might have strong connections within Apple’s supply chain.

For reference, the iPhone 5, iPhone 5c and iPhone 5s each has 1GB of RAM. Though Apple never specifies the amount of RAM on iOS devices, software tests and chip analysis by semiconductor researchers like Chipworks help answer that question. 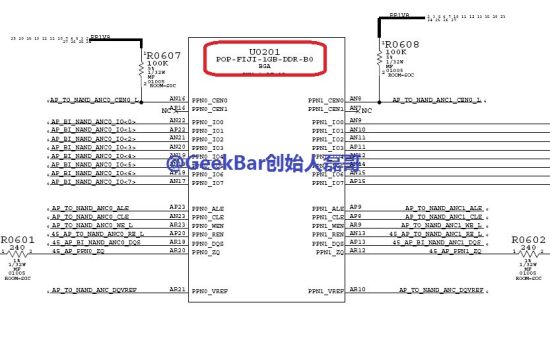 As a rule of thumb, the more RAM an iOS device has, the smoother the multitasking is because additional processes can remain active and fewer page swaps occur between the fast RAM and much slower flash storage.

On the other hand, because Apple engineers both the hardware and the software under the same roof, iOS from the onset has been optimized for low memory footprint.

It’s therefore not surprising that iPhones with 1GB of RAM run just as smooth, if not smoother, than high-end Android devices that typically incorporate 2 gigs of RAM, such as the Samsung Galaxy S5 and HTC One M8.

For the sake of completeness, I should point out that the iPhone 6 would definitely benefit from more than 1GB of RAM.

Although current iOS 8 betas appear to use fewer memory resources than iOS 7, the upcoming operating system update is extensive and allows developer to create software keyboards and system-wide app extensions, which could potentially add up to the overall RAM use.

Therefore, I hope this rumor is false and that the A8 will have twice the RAM compared to its A6 and A7 counterparts. What’s your take?