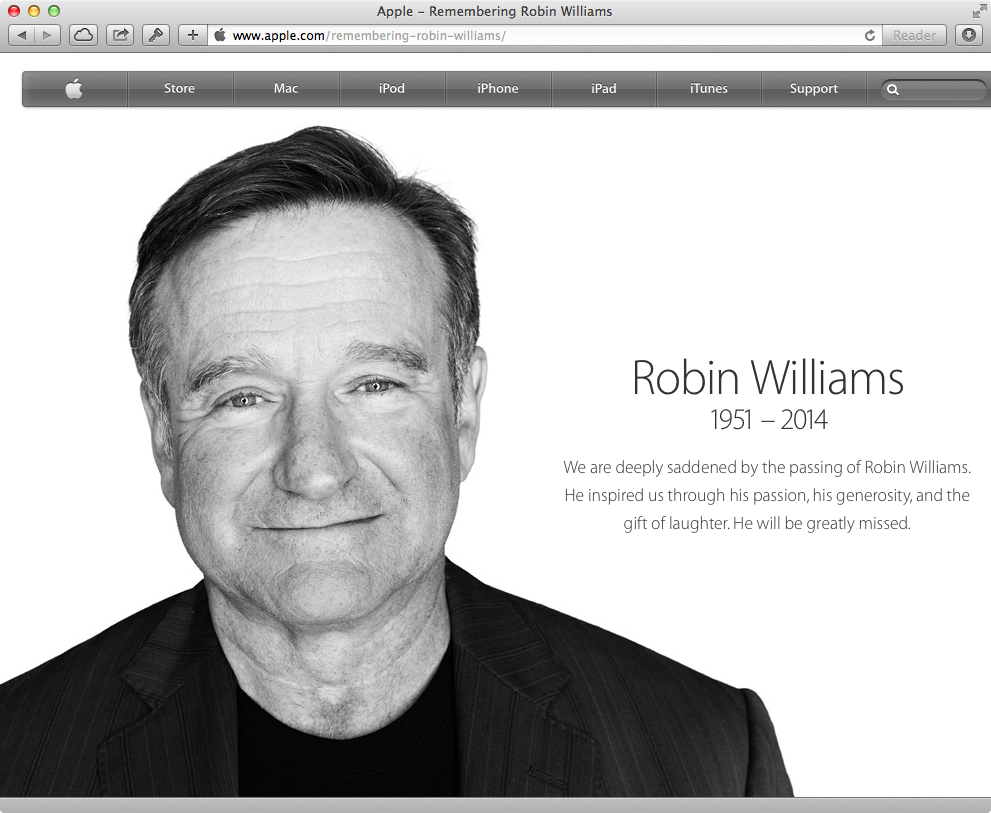 Following the tragic death of Robin Williams, Apple has paid tribute to the actor and comedian with a new ‘Remembering Robin Williams’ webpage on Apple.com, in addition to a similar section on iTunes published earlier today.

“Heartbroken by the news of Robin Williams’ passing,” Tim’s tweet reads. “He was an incomparable talent and a great human being. Rest in peace.” The company is also honoring the Oscar-winning actor with a special iTunes Store section featuring more than forty movies and stand up comedy routines.

Williams died yesterday at the age of 63. The actor was found unresponsive at his residence in Marin County, California, and was pronounced dead at the scene. The Marin County Sheriff’s Office wrote in a statement that Williams died of asphyxiation caused by hanging himself…

The ‘Remembering Robin Williams’ webpage features a black and white photo of the actor, followed by the year of his birth and death and the following line:

We are deeply saddened by the passing of Robin Williams. He inspired us through his passion, his generosity, and the gift of laughter. He will be greatly missed.

Heartbroken by the news of Robin Williams’ passing. He was an incomparable talent and a great human being. Rest in peace.

Cook also tweeted out a link to the tribute page an hour ago.

A new ‘Remembering Robin Williams’ section is now live on  the iTunes Store containing 40+ of the actor’s popular movies and stand up comedy routines organized into sections like “Essentials,” “Comedy” and “Drama”. 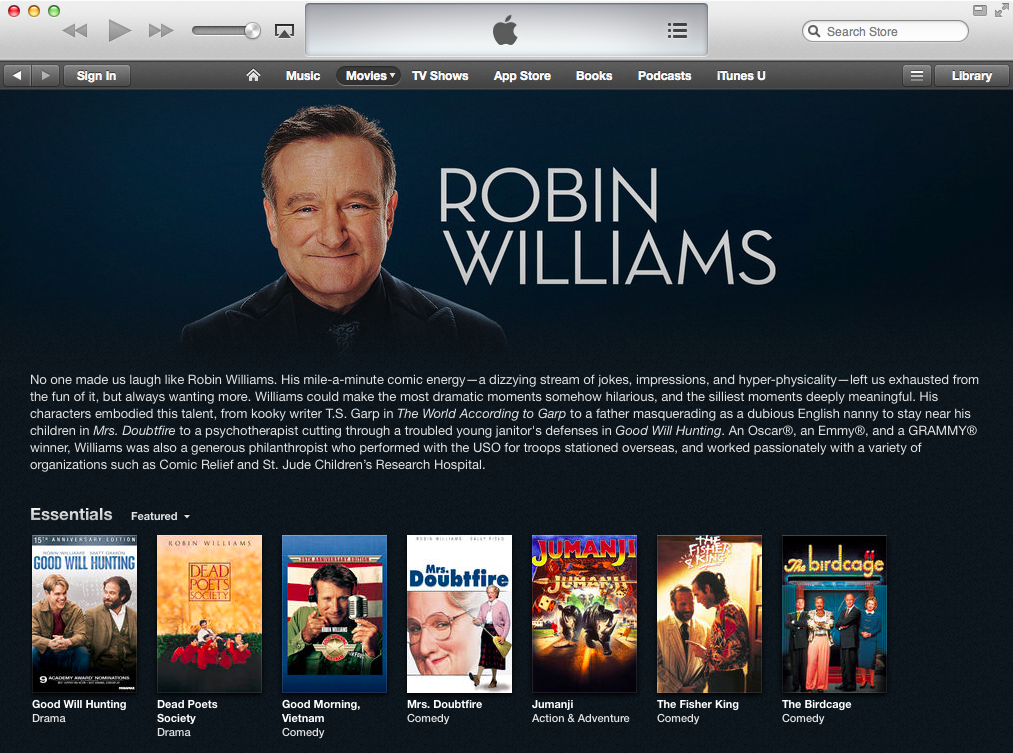 The blurb on iTunes reads:

One of the most beloved and unforgettable performers in the history of show business, Robin Williams brought laughter and inspiration to millions. Throughout a career that spanned five decades, Williams evolved from stand up comedian to international movie star. Among the great masters of improv, he transfixed audiences with a mile-a-minute comic energy.

Williams’ Golden Globe-winning turn in Good Morning, Vietnam demonstrated that his versatile acting talents were equally suited to evoking dramatic complexity. Many of Williams’ most iconic performances–in Dead Poets Society, Mrs. Doubtfire, and his Oscar-winning triumph Good Will Hunting–were dazzling high-wire acts that left audiences in tears of laughter one minute and tears of poignancy the next.

The iTunes Store section reminds us that Williams participated in the Comic Relief USA charity which has managed to raise more than $50 million for homeless assistance.

I’m moved by Apple’s gesture and am glad the company has decided to pay tribute to one of the greatest creatives Hollywood has ever had.

Previously, the Apple homepage commemorated the passing of Nelson Mandela and Rosa Parks, as well as of its own executives including board member Jerry York and co-founder Steve Jobs.