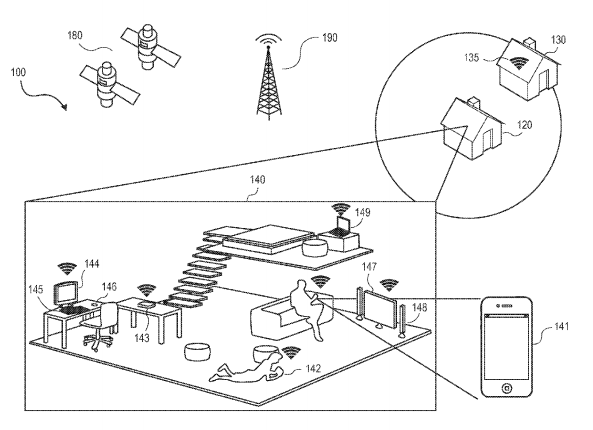 Apple has filed a new patent with the U.S. Patent and Trademark Office for an invention that dynamically changes the security, settings and behavior of a device based on its location. For instance, most users may only require a four-digit passcode on their iPhone while at home, but would prefer to use the more secure Touch ID while in the workplace or traveling.

The hardware and software of a device would work in tandem to identify the location of the user and adjust the security levels accordingly, based on its proximity or connection to cellular data towers, local Wi-Fi networks, other cell phones and more. There would be certain thresholds depending on how confident the device is in the security of the surrounding location…

“A secondary data processing logic, dubbed a ‘location context’ module, determines which settings to apply based on the system’s relative confidence in correctly placing device location. Using a predefined scale to measure against, the module defaults to certain settings based on thresholds of confidence.”

Apple has included iPhone screenshots in the patent filing that provide a glimpse at how the feature could work. The illustrations depict a toggle switch for location-based security, alongside options for naming the location, setting it as “fixed” or “mobile,” and adjusting the security level required in that location. The screenshots show “no passcode” and “decreased passcode” as examples. 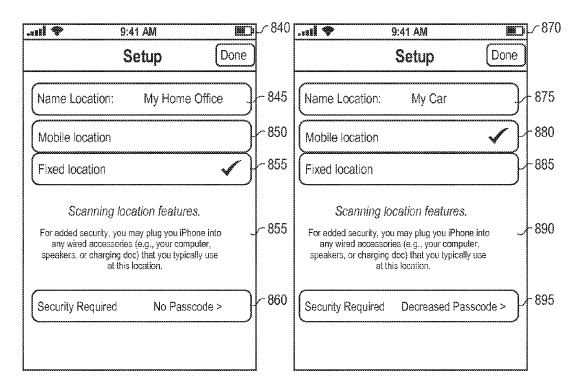 The feature would not only apply to passcodes, but also to how the user interface works in general. For instance, the iPhone could have a smarter Home screen that displays primarily productivity apps in the office, but more entertainment apps when you return home. There is also a “My Car” setting that would allow things like dialing 911, but limit other functions.

Location-based security and settings would make a lot of sense. While most people have their iPhone with them throughout the day, they are often moving between the home, car, office, shopping mall and so forth. It would be convenient to have a more personalized experience, with security and settings that automatically adjust based on where you are.

Apple first filed for this patent in 2012, crediting Alexander Reitter, David Amm, Julian Missig and Raymond Walsh as its inventors. It is unlikely that we will see the feature implemented in iOS 8, as it seems like too noteworthy of a feature for Apple to make no mention of at its WWDC keynote last month. But it is more than possible in future software versions.

Would you find this to be a useful feature?