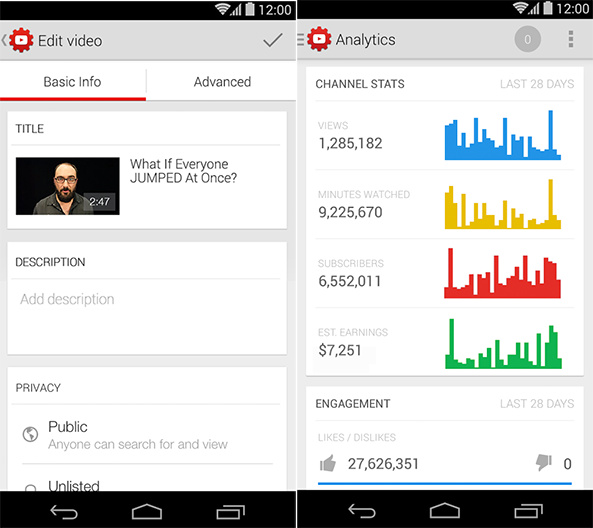 YouTube has announced that it will be releasing an iOS version of its “Creator Studio” app in the coming weeks, as part of a broader effort to offer improved tools for a growing number of content creators. The app is already available on Android, allowing anyone that uploads YouTube videos to track analytics, including views, minutes watched, total subscribers, estimated earnings, engagement statistics and more…

“Did you know that after Rebecca Black uploaded “Friday,” she went on a school trip, not knowing for several days the video was going viral? To help you manage your videos on the go, the new YouTube Creator Studio app lets you see analytics, manage your videos and more. The app is available now on Android and launching on iOS in coming weeks and you’ll see some redesign of the Creator Studio on desktop too.”

At the annual VidCon convention in Anaheim, YouTube provided a sneak preview of several other new features it is working on for creators: thousands of royalty-free sound effects, 60 frames per second videos, fan funding, creator credits, fan-submitted subtitles, info cards, and more ways to create playlists. There will also be a new “The YouTube 15” weekly show in partnership with SiriusXM.

Creator Studio should be free on the App Store for iPhone when it launches.