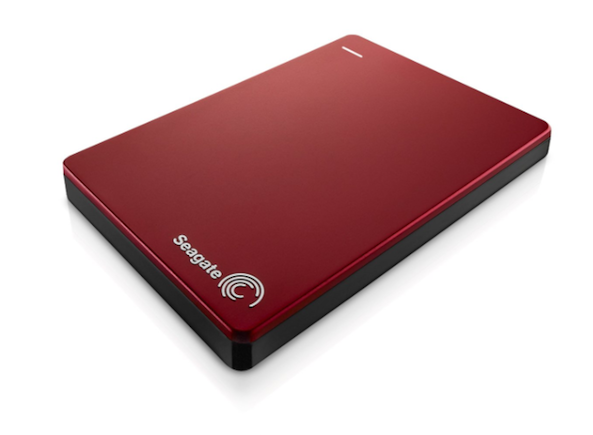 Seagate is the world’s largest provider of external hard drives by volume. Personally, I have around five or more scattered around my home, office and desk–too many to attempt to round up for an accurate count. They make great LAN, portable, wireless, and desktop class storage. Of course Seagate makes internal drives as well, but my experience with them is less versed. As I have witnessed, assumedly along with others familiar with the product line, Seagate is now producing a more creative approach to an otherwise simple storage device.

External storage, as a whole, used to be a simple drag-and-drop venture. Arguably, it was a simpler time. I really appreciate the ability to just plug in a drive and drop stuff to it. However, with the advent of social media, home networking, and some creative thinking, external storage is now something much different. Considering the Seagate Backup Plus line of products, which I first discovered at CES 2014, social sharing and saving are now integrated with the drives…

When first connecting the drives, I was upset, but not surprised, to find out they are formatted to the NTFS file format and require an installed driver to operate via OS X. With the NTFS file format, the drives are read/writable to both Windows and OS X. Consequently, the first order of business is installing the driver, which is included on the drive out-of-the-box. If you choose, install the Seagate Dashboard, which allows the additional feature set to integrate with the computer. For an introduction to the line, check out the video below:

The “Protect” feature, for PC’s only, within the dashboard allows designated backup of either some or all non-system files. You may choose to, either backup your system at the initial load and/or setup a backup plan with a designated schedule. The customized plan allows for designation of the time and even file structure items to include. If you would like an in-depth tutorial of the details, Seagate provides a helpful five minute video on creating a custom backup plan, again for PC’s only. Time Machine is the option for Mac users.

Mac and PC users have the ability to interact with socially shared media. With “share” on the Dashboard, you can post to your social channels from within the proprietary application. This means, if you have images or videos saved to your drive that need to be uploaded, “share” pushes them to the designated account, including Facebook, Flickr, and YouTube. Perhaps more helpful, the “save” feature pulls down and saves copies of your social media uploads onto the external drive. “Save” will pull down digital copies of both Facebook and Flickr accounts, once linked. Click the corresponding account and the Dashboard will backup the images directly to the drive; however, this is limited to images you personally upload, leaving images of other Facebook users online without backing them up, even if you were tagged in the photo. I would chalk that up as a shortfall. Auto-Save will automatically detect new images when the drive is attached to the computer. For a quick walkthrough, check out the Seagate support video.

The mobile backup feature provides the ability to backup pictures and videos from your mobile device through the Seagate Dashboard and the Seagate Backup app. First, create a mobile backup account, managed by Seagate, through the desktop Dashboard. Once an account is created via your desktop, launch the app, which will prompt you to setup your account on the device. Sign in using the same credentials from the Dashboard. Mobile backup plans are created to determine how your data will be backed up. Two options exist, either via an in-home Wi-Fi network or through a third-party cloud service. Select the file types to be backed up, in this case, photos and videos via Camera Roll. Once selected, tap the drive, which is connected to your computer on the same WiFi network. An indicator will prompt your status. Check out the Seagate mobile video. 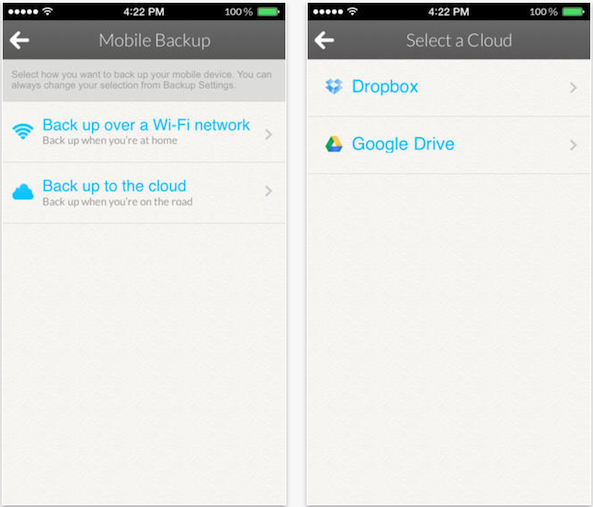 Interestingly, the app can utilize Dropbox or Google Drive to backup while on-the-go. The app will push your content into the third-party storage systems. Once the service can reconnect to the drive, when it is plugged into your computer and running, the third-party will push the content down to the drive. It would be nice to use other services, like Box, but currently Dropbox and Google Drive are supported. Another thing to consider when backing up in this fashion is your data plan. Offloading all of your content in this manner can weigh heavily on cell data.

Just like the desktop “Protect” feature not working for OS X users, the mobile backup feature is also fairly pointless. I can see PC users, without PhotoStream auto-feeding into iPhoto, really utilizing this service. However, any iPhone and OS X touting user, will simply rely on PhotoStream to take care of this heavy lifting. I do, however, like the ability to offload my photos while on vacation, then delete them on my iPhone to clear up space. They would then be automatically downloaded to my Seagate drive.

Backup Plus line products boast intense level speeds via USB 3.0, FireWire or optional ThunderBolt connectivity. The Backup Plus Slim 2TB red drive I received from Seagate was a mere 12.1mm thin, 76mm broad, and 113.5mm long. It is perfect for a pocket, backpack, or purse.

Where I was truly amazed is the Backup Plus Fast, which can transfer speeds across USB 3.0 at up to 220MB/s. I was upset, however, I couldn’t find a drive speed anywhere, but I assume it is 7,200RPM. Most importantly, the Backup Plus Fast is one of, if not the first high-performance portable hard drive. Having 4TB of unchained space is amazing. This desktop class storage amount would typically require an AC wall outlet for a direct line of power. I would still consider this a small portable option for 4TB with a chassis size of 4.6″ x 3.25″ x 0.88″ (116.0mm x 82.5mm x 22.35mm).

Check out the below video of photographer Charles Bergquist as he takes the Backup Plus Fast to SXSW.

There is a wide array of helpful features packed into the Seagate Backup Plus line. I would like to start with a congratulatory remark about these drives not including an install CD. It is only in approximately the past 24 months, Seagate has finally ridden its products from CD installs. By preloading the Seagate Dashboard, as well as NTFS drivers for OS X, I can just plug and go.

Admittedly, I hate installing drivers or even fancy dashboards for that matter on my Mac . However, Seagate is not just offering a drag and drop drive, rather a full solution for the user. Most of the features, like “Protect” are only geared toward PC users and the backup app option is also redundant for iPhoto-PhotoSream users. Consequently, a lot of the additional features are not that impressive to Mac users. They are, however, extremely beneficial for users with PCs. 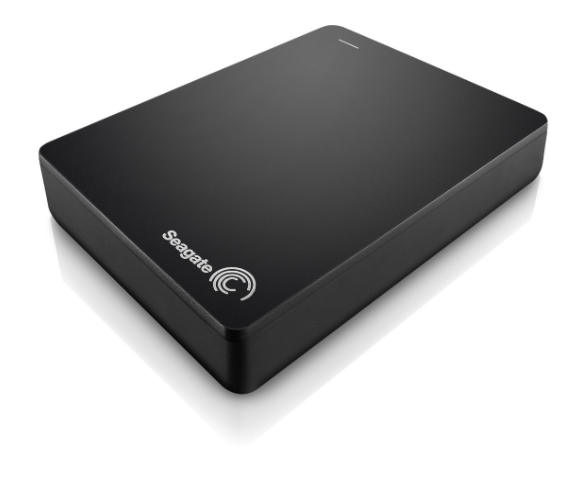 If you are one of those people who blends the Apple ecosystem with Windows, the Backup Plus series is a Godsend for you. Take advantage of the various features included in the drive to not only use a TimeMachine-inspired backup system for your Windows desktop, but a way to push over content from your iPhone directly into a storage solution. The Backup Plus line is the missing link between your iPhone and Windows.

The Backup Plus Slim 1TB currently starts as low as $65.98 and the 2TB red version is only $119.99. Even if you will only use the portable drive for drag-and-drop file storage, without the extra options, the price is completely justifiable. The Backup Plus Fast 4TB standard retail price is $269.99. I would have to hold on that purchase, especially considering I could buy two 2TB portable drives for less. The advantage is, however, top notch speed and desktop class architecture in a portable housing. I would never believe 4TB in a portable package was an option. If 4TB is not what you are after, 500GB options start at $59.99 and still offer high-end speeds.

To view all of the nitty gritty details about the Seagate Dashboard, please read through the User Guide, published by Seagate. Although this review covers some of the more global level features, it is always best to look at the fine print before investing in such a robust product with a high price range. Additional helpful information is included in a support library, both for the Backup Plus and the Backup Plus Fast.