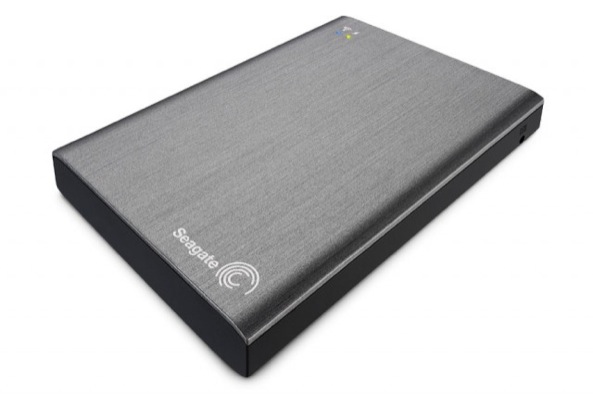 After meeting with Seagate at CES, I was excited to get my paws on their new Wireless Plus, which is big brother to the recently retired and previously reviewed GoFlex Satellite. We all need our digital content on the go and, often, our iOS devices do not have enough room. I know my 16GB are carefully utilized on both iPad mini and iPhone. Toting around a Wi-Fi enabled 1TB Seagate drive prevents the need for choosing which media to bring along. Just drag and drop your media file to the Wireless Plus and walk out the door…

Why and how would you use it?

The “why” is simple. The Seagate Wireless Plus is a portable Wi-Fi enabled 1TB external hard drive with a companion app for iOS devices. It makes every shred of information on your computer portable and sharable. I could copy and paste my entire iMac hard drive to this little guy and never be without my data when on the go. To learn how to quickly create a portable media library, watch Seagate’s instructional video.

Perfect for the backseat of your family vehicle, the Wireless Plus streams HD content to three devices or streams documents, photos, and songs to eight. Heading out of town on a terrible flight, load it down with movies and stream them directly to your device. To make it abundantly clear, because the drive produces its own Wi-Fi network, you will not be paying last month’s paycheck to access the in flight GoGo service.

How to use the device is simple for the novice users and slightly frustrating for power users. When I spoke with a few of the Seagate engineers, they explained their goal for the 2013 line-up was to have the customer using their devices in less than five minutes, without the need for additional software. After running the initial setups, I can vouch for their accomplishment.

To begin, open the packaging and follow the five step guide included in the box. A little caveat, step four is following the in-app tutorial which is actually seven steps, so let’s be honest and call it a twelve step process. If you want the details, watch the Seagate Getting Started video. Even so, I was up and running quickly and without the need to run an installation disc on my computer.

Once connected to the drive by directly accessing the self broadcasted network, opening the Seagate Media app for iPhone and iPad displays all content automatically sorted by video, photo, music, and documents. If there is something you upload from your computer that does not match one of those criteria, there is a folder structure built into the app. 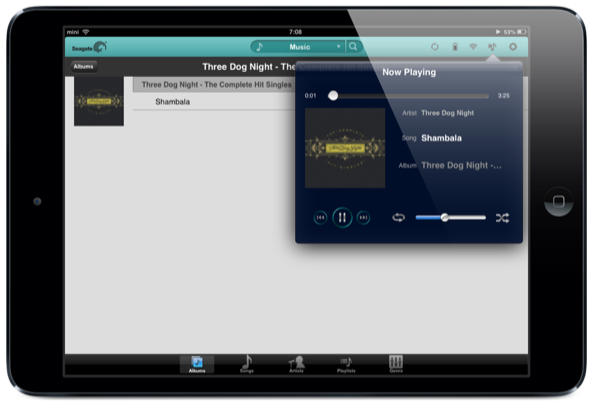 Playing music is simple and the in-app music player even shows album art. The app will run music in the background allowing you to access other apps while streaming music from the drive. Video is also easily accessed and played with a built in movie player. Pictures can be streamed as a slide show or individually controlled. Showing Granny the wedding pictures no longer needs to take away from Angry Bird space on your iPad.

Thus concludes the average user part of the review. Everything on the Wireless Plus functions as advertised and can easily be operated by the average layman. Where it gets tricky is when you want to push the drive a little past its frontline.

If you are like me, you want to know a little more than what you can find on the advertisement page. What about DRM? What about network attached storage (NAS) options? Can I upload and download? I intend to give you a quick overview of my findings, but Seagate does have a well built FAQ page and an online user guide.

Number one on my important list is the ability to watch personal backups of movies in my current hardcopy library. If you are like me, you never want to pay for the $39.99 Blue-ray, Blue-ray 3D, digital copy, magnificent, super, 30 extra seconds edition of your movies. Don’t even get me started on Ultraviolet. So, I buy my movies and then make my own digital copy.

Rest assured, the Seagate Media app can play your personal backup copies. It did give me a fit sometimes, stating with a popup the video format was unsupported, but after restarting the app, it ran smoothly and even remembered my playback locations. 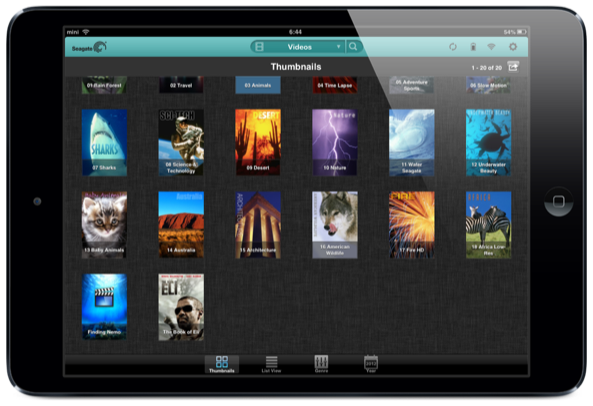 DRM movies are also an initial concern. In fact, I talked with the guys about this too. I copied an official digital copy over to the drive and crossed my fingers. The work around on DRM movies is Safari. The DRM movie is pushed from the Media app over to Safari because Safari.app does not check for DRM licenses. This allows the user to play actual iTunes movies on the Wireless Plus. If the app did ever give you a fit, the entire drive OS is operable through Safari directly, which means the user never really needs to download the app. Music, by the way, worked perfectly, iTunes or other sources was not a problem. Both formats played natively in the Media app.

NAS is a little saucy. To attach the drive to your home network is not truly an option. The device does allow network access as a passthrough device, but it does not reciprocate. Accessing the drive initially requires the iOS device to directly connect to the drive’s Wi-Fi. Then, once connected, the Media app can select an available LAN, plug in the password and it will connect. After that, any device on the LAN can find and access the drive, which is DLNA compliant. This is a very basic instructional video by Seagate. 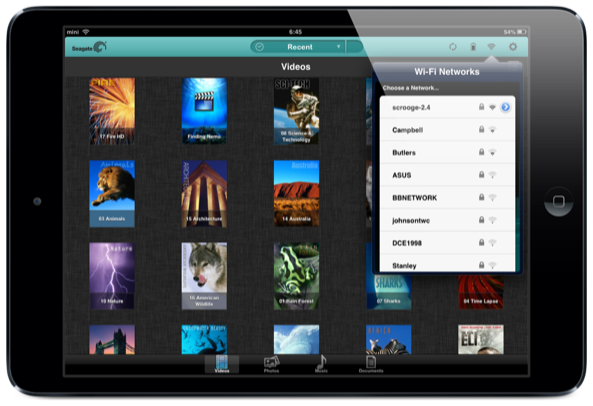 However, once the drive is turned off, it will not automatically rejoin the previously selected LAN. Each time you want to use the drive, you must reconnect the iOS device to the designated drive Wi-Fi, then re-enter the password for it to connect. This is severely frustrating. I would rather connect the drive to the LAN once, then every time the drive is powered on, it could reconnect to the drive without first joining the drive’s Wi-Fi network individually.

The app also has AirPlay connectivity. However, the LAN situation makes for a little mess. If you want to listen to music from the drive via AirPlay, you must attach the drive to the LAN, as described above. Then, reconnect your iOS device to the LAN and access the drive through the Media app. Start to play a song, then choose AirPlay. Otherwise, AirPlay will not work by connecting directly to the drive, then adding it to the network. You must access the drive from the network for AirPlay to work.

For a power user, the ability to upload and download files is a huge advantage and a new feature of the Wireless Plus. I would use this feature most when traveling. I love taking pictures and movie clips when vacationing, but the files fill up my small iPhone drive quickly. Now, I can open the Media app, select my camera roll and dump all of the pictures from the iPhone to the drive. Then, delete the photos from my iPhone and start fresh the next day. Returning home, plug the drive into the iMac and download them straight into iPhoto.

Downloading files is just as simple, but the downloaded files only appear to be accessible if using the Media app. For example, I downloaded a picture from the drive to my device but it never showed up in the camera roll. Instead, the photo was only viewable in the Media app folder section.

Finally, I could not figure out how to delete content on the drive from the app. It appears the only way to remove content is to access it from your computer’s file structure and, then, delete content. I think, over time, I would find this frustrating. Speaking of deleting, the drive can be formatted as an HFS+ or OS X journaled drive. This will prevent you from having to add the Paragon NTFS software on your computer to write to the drive. However, changing the structure will complicate things when trying to use the drive with Windows. 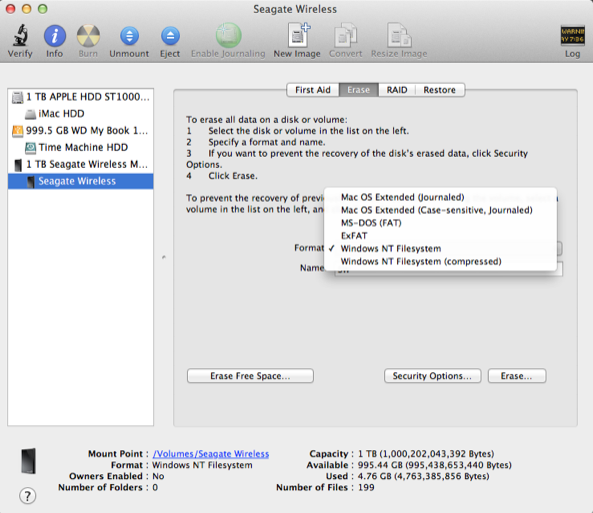 At $199.99 on Amazon, this is not just an impulse buy. It is a powerful tool, despite some inefficiencies, and intended for someone with a load of extra media. The media also needs to be accessible anywhere at any time. Sure it is a great device to throw your movies and pictures on, but it will cost you. Thankfully, for the price, you will have USB 3 access, a travel size USB charger, and a 3-year limited warranty. As it is meant for travel, I would love to see it come with a little travel case for the price.

Seagate came a long way from their last iteration of the same product and I thank them for sending over a unit for review. Now, Seagate boasts a 10 hour battery life to match the iPad, a newly revamped app, and a smaller device. Getting the device up and running in less than five minutes without a software disc is also much appreciated.

Overall, it is an award winning device and I’m inclined to agree with the hype, save the shortcomings mentioned in my article. There is obviously always room to grow, but this is a solid drive.

If you managed to make it to the bottom of this article, what are your thoughts? Does anyone out there use a similar device? Headed out to buy this one?