Always moving forward, Seagate continues to reinvent current solutions. This time, Seagate took a hard look at their previous NAS drive, the GoFlex Home, and decided it left a few things to be desired. In an effort to impress, Seagate tore down the Home and seemingly started from scratch on the Central.

Overall, I am fairly impressed with Seagate’s changes to the new hardware and corresponding software, online dashboard, and revamped media app. After speaking with the engineers behind the drive at CES, there appears to be a more prevalent focus on user experience with the new 2013 product line, of which I previously reviewed the Wireless Plus. Leading the charge for a user friendly product, this previously complicated network drive enables even novice users to go from box to operational in less than ten minutes…

Why and how would you use it?

The “why” is fairly simple to answer, but the “how” is based more on your needs. Both of the two principles are inherently linked. Consequently, answering the “why” will most certainly lead to the “how.” Breaking it down to the basics, Seagate Central is a hard drive that attaches to your home router. This type of product is termed network attached storage (NAS), which is different from a standard external hard disk drive.

Central connects to an existing wireless router or network switch to provide a centralized location for digital content storage. Previously, setting up a network storage client would provide quite a headache for any user. Thankfully, Seagate’s included 3-step quick start guide is fairly simplistic. Place the Central near the router, attach the drive via an included CAT-5 cable, and plug it into an AC outlet. The next step is to visit the Seagate Central setup page, which guides users through the remaining few steps. 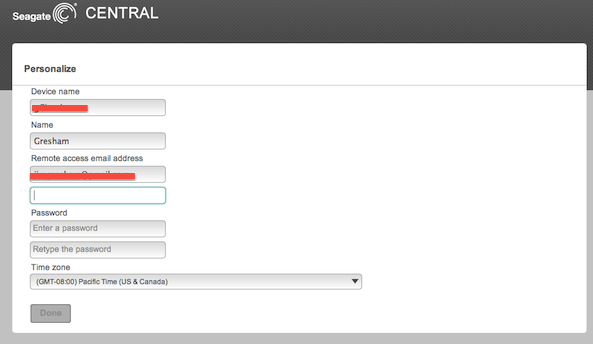 Even before proceeding through the final setup steps listed on the start page, the Central populated automatically as a mounted drive in my Finder window, which felt like a small miracle. I did have a little trouble with it showing on my Air, but on my iMac it was mounted successfully. For a complete look a the initial setup process, view this helpful Seagate video or setup document. 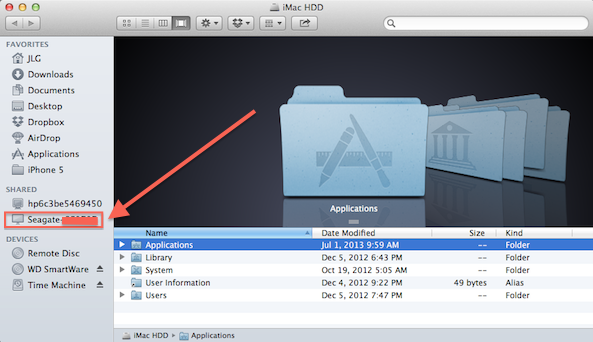 After completing a quick registration process, users are able to access the NAS settings via a web browser interface, which is designated by an individual IP address, a link to which is found in the mounted drive folder. Additionally, users can view, share, and utilize stored content through the Remote Access online dashboard and the Seagate Media app. Most importantly, the Central is DLNA certified, giving networked hardware, like BluRay players and console systems, access to the stored content. 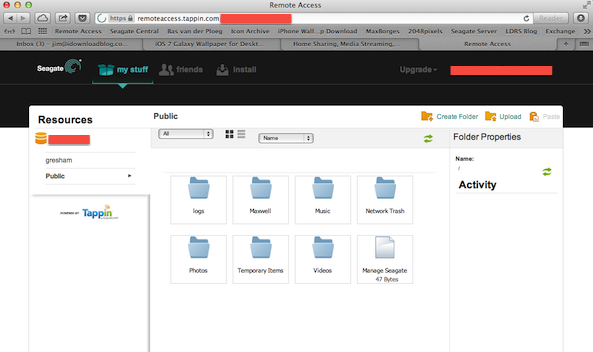 Given five to ten minutes, I am confident even my mom (no offense!) could set this up, plug it in, fill in the prompted registration questions, create a user account, and download the app. The software and hardware work as advertised and fairly swimmingly, I would add. Thus, concludes the standard user portion of the review, or, read on for a more in-depth analysis.

Visiting the Central’s IP address on the home network provides individual setting controls for more in-depth pieces of the hardware. This root interface gives access to create/delete individual user profiles. A user profile can create private folders within the drive, only visible to that user. Conversely, any information stored in the “Public” folder is consumable by all profiles.

More interesting setting features include social integration and WAN configuration. In the root settings, connect Central with Facebook accounts to automatically backup photos and videos without the need to turn on a computer. Additionally, turn on/off Media app and Remote Access, via the same web based drive dashboard. DLNA access is controllable, including iTunes library remote access. iTunes access will allow iTunes.app to search the networked drive for music or a local library. Seagate provides a Remote Access setup video and simple iTunes instructions. 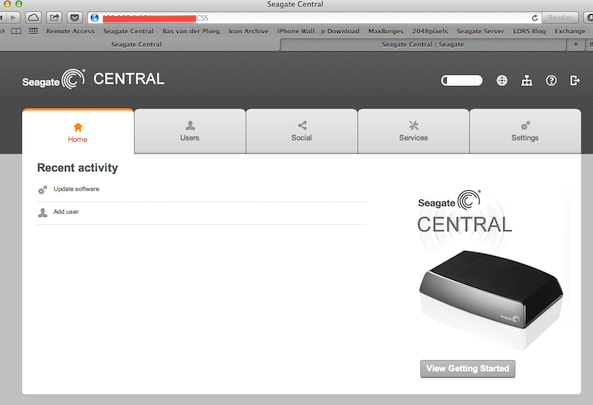 The Remote Access online dashboard provides user access to the Central from any web browser around the world. It should be noted, Remote Access is powered by a third party provider named Tappin. The login account created to access the root system settings is separate from the account created to use the Remote Access feature from a web browser or app. To enter the Remote Access dashboard, an account must be created with Tappin. Thankfully, Seagate walks you through the process, but after tinkering with the user accounts for this review, my Remote Access account disassociated itself from my Central. After a lengthy, but surprisingly amicable conversation with Phillip at Seagate customer service, my account was back up and running. There was some confusion over the ownership of this error, whether Seagate or Tappin was to blame. In the future, I would appreciate Seagate providing their own infrastructure and keeping things in house, if possible.

In the dashboard, public and user defined private folders are accessible. Files may be edited by renaming, deleting, copying/pasting, and sharing. Sharing can be done by uploading allowable files to Facebook or a system generated email can be sent to individual people. When sharing with others, individual files or even full folders can be shared with anyone who is given the link and a specific password. I really wish this was built into the mounted folder structure within Finder, similar to Dropbox’s ability to right-click/ “copy public link.”

In the Remote Access dashboard, streaming video struggles, even on short clips. I cannot necessarily peg this on Seagate. Streaming content from a personal server depends highly on ISP and broadband speed, both upload and download. If a user has low upload speeds, the video will not be sent from the Central to the dashboard at a high enough rate to smoothly watch high bit rate video clips. However, the user can download the file. This unfortunate predicament leads me to the app.

In the Remote Access online dashboard and the Seagate Media app, video streaming has been eliminated. The GoFlex Home, which preceded the Central, allowed users to stream content via the Media app, but the new app and Central are forbidden to do so. I asked a contact at Seagate about the change of heart and was informed that low performance caused Seagate to drop the app streaming function. The app will, however, allow the user to download the video to the local device, then view the full clip.

There is a caveat to streaming. If the user is on their home network, the app will stream videos amazingly well, even full features. The streaming limitations only arise when off the LAN. All video standard types work through the app, even DRM videos, which are rerouted through the Safari.app QuickTime player to avoid any license complications. I especially appreciate the app also working with the Seagate Wireless Plus portable WiFi HDD. 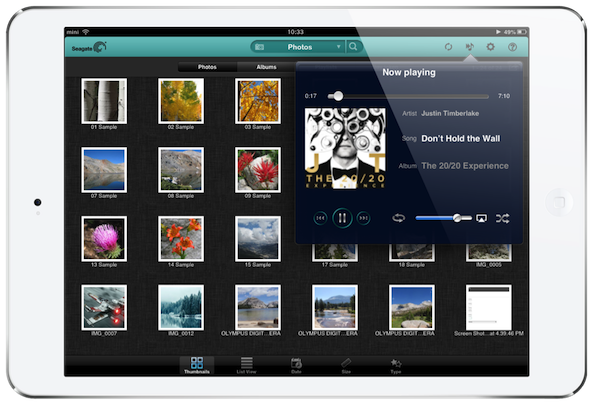 Pictures and music are a little more responsive on the Media app, even remotely. Pictures can be downloaded from the Central to the iOS device or files can be uploaded remotely from the device to the drive. This functionality is perfect for a road warrior that needs to offload a bunch of pictures in the field. Downloading files is just as simple, but the downloaded files only appear to be accessible if using the Media app. For example, I downloaded a picture from the drive to my device, but it never showed up in the camera roll. Instead, the photo was only viewable in the Media app folder section.

Playing music is simple and straight forward, including album art and backgrounding capability. AirPlay is even an option when on the home LAN. Music is sortable via album, song, artist, in-app sorted playlists, and genre.

As mentioned, Central is DLNA compliant and I had no trouble accessing the contents of the drive through my PS3. Because it is ready out of the box, there are no additional requirements for the Playstation or the drive for this functionality. Due to DRM, I was not able to play files purchased through iTunes and some of my personal DVD backups struggled to play on the PS3, but it was due to the file format I chose for the decryption.

Overall, the Seagate Central is an incredible connected home device. Providing a NAS solution that works out of the box with limited setup and no software to install is a difficult task for the devs. Thankfully, Seagate finally achieved that mark. This may be cheesy, but I actually chuckled to myself in excitement when I realized the Central did not come with installable software. Aside from the device’s inability to remotely stream to off-network devices, it is a well packaged option.

Granted there are several steps to get things running from ground zero, but I felt the instructions were simple and coherent enough for most users, even those with limited networking experience. At $159.99 (2TB), $169.99 (3TB), and $219.99 (4TB), I would argue this is a very affordable option. Considering the breadth of options available through the unit, iOS device streaming, mountable desktop access, and smart TV apps, Central really leads the pack for at-home user friendly options.

Like other Seagate experiences, this product is a quality build and I thank my friends at the company for sending over a test model. Finally, thanks again for ditching the install disc.

What do you guys think about this new option from Seagate? Do any of you already use one? How about the GoFlex Home? Any other NAS suggestions?