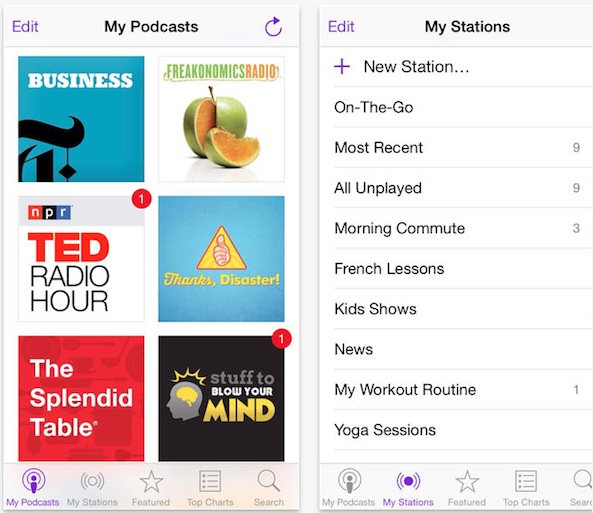 There are widespread reports this afternoon that claim Apple’s official Podcasts app is crashing for several users upon launch. The app does temporarily open, but then immediately closes and returns to the Home screen in a matter of seconds. The issue appears to be affecting devices running both iOS 7.1.1 and iOS 8 beta, according to multiple tweets and other reports.

A significant number of users have turned to the Apple Support Communities to voice their concerns about the problem, with complaints ranging from the app crashing to multiple icons and album artwork. The crashing issue appears to have been affecting users since at least 2:00 PM Pacific, when the first reports began to appear on Twitter and elsewhere…

“Just started a few minutes ago out of the blue. I touch Podcast icon to open. It opens … but only for a few seconds then closes. However, when I double tap home button it shows that I am running the podcast app and that I am in the middle of listening to a Rachel Maddow podcast. Has Maddow taken control of my device? Have restarted several times with no luck. Running Podcast 2.1.2 (586) and iOS 7.1.1.”

The following video shows the crashing problem (via 9to5Mac):

Apple has yet to comment on the matter, but we will update this post if and when we hear anything. In the meantime, at least one user has shared a temporary solution with MacRumors for this problem, which involves toggling on Airplane Mode before opening the Podcasts app. The app should then be able to open properly, even after turning off Airplane Mode.

Podcasts was updated to version 2.1.2 nearly four weeks ago, gaining improved episodic browsing, Siri integration, CarPlay support, AirDrop link sharing, stability improvements and more. Apple made Podcasts a stock app as of iOS beta 2, meaning that it no longer requires a separate download from the App Store in the latest software version for iPhone and iPad.

Podcasts is a consistently low-rated app on the App Store, with just a two-star rating based on over 500 reviews. A number of complains in reviews claim that the app sometimes does not show all files, displays multiple podcasts, does not remember which podcasts you listened to, and can even delete podcasts after they have been listened to.

Podcasts is free on the App Store for iPhone and iPad.

If you’re experiencing Podcasts crashing issues, let us know in the comments below.