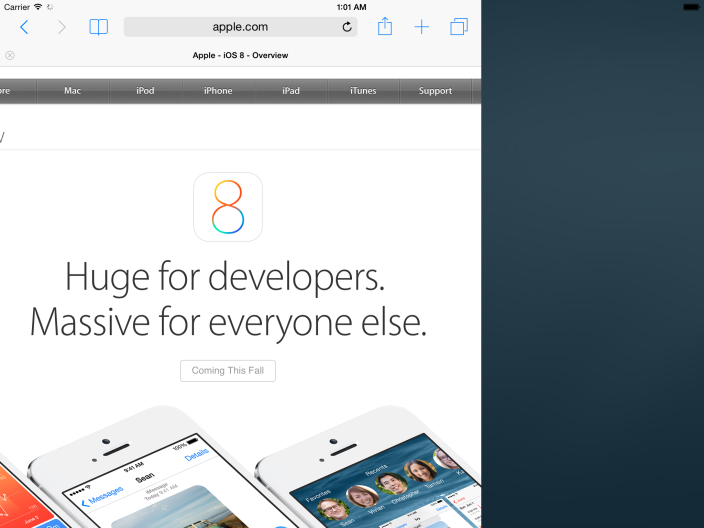 Back in May it was reported that Apple was working on a new split-screen multitasking feature for iOS 8. Designed specifically for the iPad, the feature was said to allow two applications to run side-by-side simultaneously while the tablet was in landscape mode.

But as expected, Apple’s WWDC keynote came and went without mention of the split-screen feature, so we have yet to see it in action. That changes tonight, however, as a new video has been posted that shows the feature running in the iOS 8 iPad Simulator…

The video comes from developer Steven Troughton-Smith, via 9to5Mac, who was able to hack the iOS 8 iPad Simulator to make the split-screen function partially work. The clip doesn’t show all side-by-side functionality, but it gives us a fair idea of how it works.

Note that the feature allows the screen to be adjusted for apps to either take up 1/4 or 3/4 of the display—similar to the way the Microsoft Surface works. It’s unclear if users will be able to size apps with a two finger swipe-gesture, but that’s how it’s being tested.

The code for running side-by-side apps was discovered within the inaugural iOS 8 beta, again by Troughton-Smith, a few days ago. The software update is expected to be released to the public sometime this fall, but there’s no word on if this feature will be ready in time.