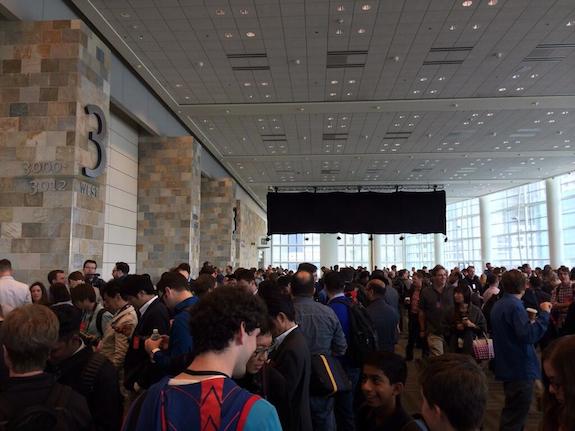 As the press, bloggers and attendees begin shuffling their way into Moscone Center for the WWDC keynote, which begins in just a few minutes, we’ve seen a stream of interesting photos tweeted out that are worth sharing. We’ve got everything from bathroom lines to the first look at what appears to be OS X Yosemite. Take a look at the roundup of photos ahead…

Whoa. At the front. #WWDC pic.twitter.com/OzeR6oiRpf

Hahaha! for once the women's bathroom has no line. #WWDC #SanFrancisco #Apple pic.twitter.com/LofMRWxp8R

Here are the Macs where Apple will run the OSX demos. #WWDC pic.twitter.com/Pz7FuRhPYN

The #WWDC crowd with cloaked banner above. Less than an hour until start. Live blog http://t.co/w38upTsx1S #WWDC14 pic.twitter.com/mKsbbMsxoa

Everyone is lined up and ready for #WWDC, including me. pic.twitter.com/5DV0krP3t9