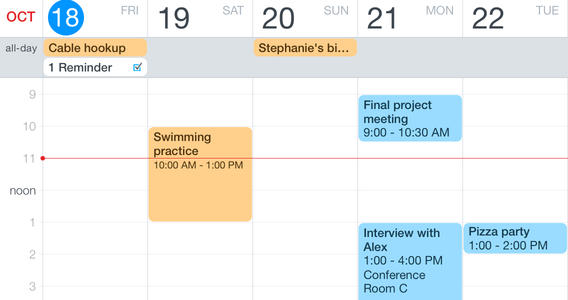 Flexibits’s Fantastical 2 for iOS has received a maintenance update this morning bringing several bug fixes, alongside a useful improvement to how the overlapping calendar events are handled.

Bringing the app up to version 2.0.7, the team has made changes to how it handles many overlapping events by improving your week view layout to fit more content while making the individual entries legible.

Today’s update is available for both the iPhone and iPad edition of Fantastical and is now live in the App Store, free for existing users…

In addition, there are some bug fixes in Fantastical 2.0.7:

The versatile app lets you send text messages in WhatsApp and integrates with your iOS Calendar and Reminders accounts.

As a result, any calendar or reminder entries you add in Fantastical become immediately available to stock iOS apps or in any third-party software which reads data from your iOS accounts.

You can buy Fantastical 2 for iPhone for $4.99 in the App Store.

The iPad edition is a standalone download that will set you back $9.99.

Both require iOS 7.0 or later.

The Mac edition of Fantastical, a $19.99 value, has not been updated with the aforementioned improvements and bug fixes and is currently sitting at version 1.3.15.

Flexibits released Fantastical for iPad in April and our own Sebastien has a nice overview of the many ways the tablet’s larger canvas improves upon your calendar and reminders experience.

You may also want to check out our list of Best Calendar apps for iPhone.