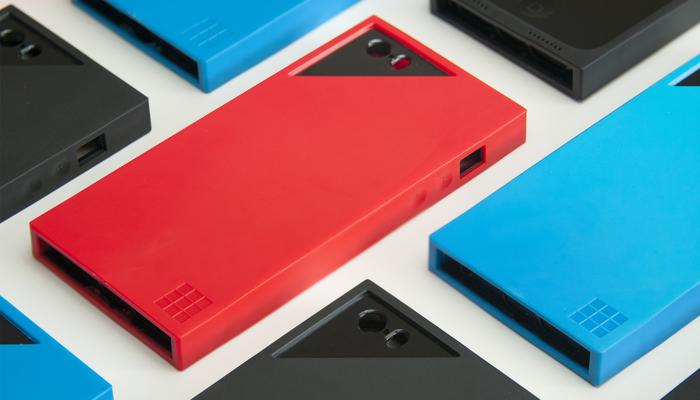 If you’re in the market for an iPhone battery case, you really only have one option. Well, actually you have hundreds of options, but for the most part they all look the same. Don’t believe me? Do a Google Image search for the term ‘iPhone battery case.’

Enter the new Augment iPhone case, by Rubix. It features a square design, with a detachable battery pack, so that you can get extra power when you need, and none of the added bulk when you don’t. This is definitely not your typical mophie juice pack…

The Augment is made up of a soft TPU on the outside, hard PC on the inside. Its unique modular design offers protection from drops and bumps, as well as access to your iPhone’s Lightning port—something that most iPhone battery cases don’t do.

The detachable battery pack is called the Augment Charge, and at 1200mAh, it’s stout enough to provide you with up to 60% extra power. It’s also very light at 38g, and small enough to fit in your pocket. And it features a handy LED status indicator.

Rubix has already completed a successful pilot run of 30 Augment units, and has taken to Kickstarter to raise money for its final MFi certification and mass production. With 30 days left to go, the project has raised almost $14,000 of its $17,000 goal.

If you wish to help, or would simply like to order an Augment, a pledge of $50 or more gets you on the pre-order list (for iPhone 5 and 5s only). Both the case and charge pack come in black, red, and blue, and shipping is free to the United States.

So, what do you think of the Augment?