There are thousands of different types of iPhone cases on the market. You can spend less than $10 for a very simple back case, or hundreds of dollars on a luxury leather executive cover. There is a case out there for everyone.

Logitech has recently launched the Case [+], which may just be the right fit for every one. It is more than just a case. It is an all-in-one accessory kit for your iPhone 5 or 5s. The kit comes with a protective back cover, a car mount, a credit card holder, a backup battery, and a flap that doubles as a stand. The Case [+] kit comes with nearly everything you’ll ever need for your iPhone.

We have been putting the Case [+] through the paces to find out if it is all it is hyped up to be. Check out our hands on review of Case [+] below…

The main cover is made from soft rubberized polyurethane around the sides and dark gray anodized metal on the back. It is slim fitting with about one-eighth of an inch thickness. The iPhone ports are all exposed, including the speakers, so nothing is obstructed from use. The back facing camera and flash lens are exposed so you can take pictures without having to remove the cover.

In addition to the iPhone cover, the kit comes with a magnetic windshield mount and dashboard mount adapter, a magnetic wallet, an ultra thin high-powered external battery case, and a tri-fold magnetic flap that doubles as a kickstand and an ear bud wrap. 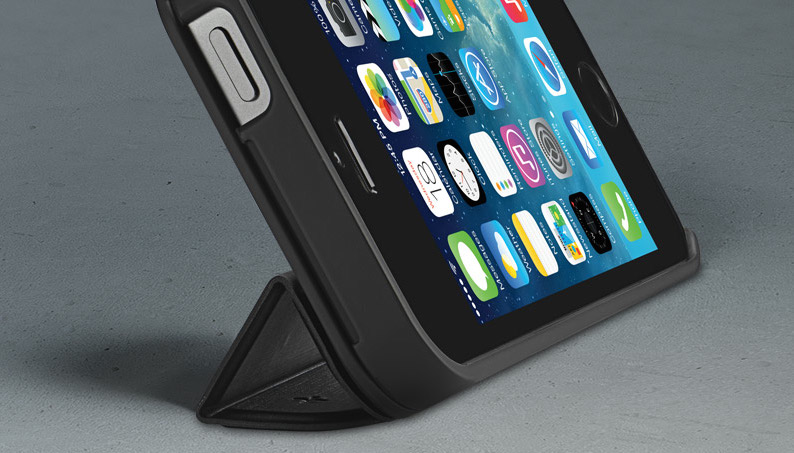 Lets start with the tri-fold magnetic flap. Logitech calls it the [+] Tilt because it can be folded to serve as a stand for your iPhone. The flap is very similar to Apple’s Smart Cover. When folded, you can also keep a thin cord bundled up inside it. The cover magnetically connects to itself, forming a triangular storage case for ear buds, charging cords, or whatever you can fit into it.

Because the [+] Tilt is magnetic, the metal backing on the Case [+] sticks to the flap so you don’t need any connectors. The [+] Tilt is also designed to be a magnetic mount for anything you can stick it to. The magnets are strong enough to keep your iPhone stuck to your refrigerator, filing cabinet, or any metal surface. 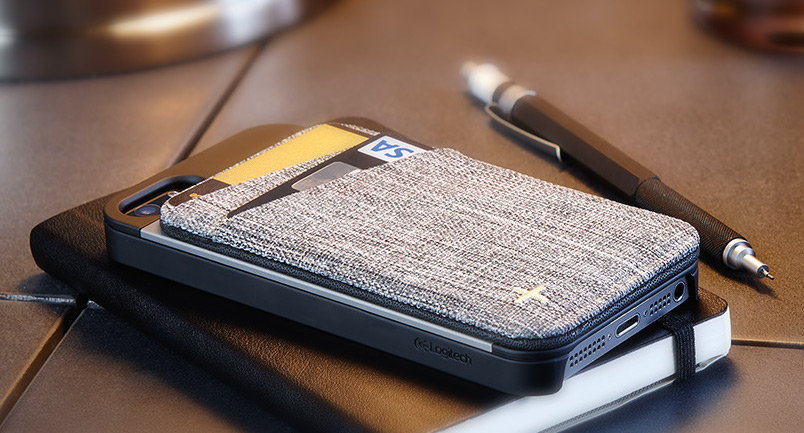 The [+] Wallet is made from executive style gray tweed so it is sturdy, but attractive. The pockets are very tight so your cards probably won’t go flying out of the sleeve unless the material starts to loosen up. I also kept a wad of cash in the front pocket for easy access and found that, sometimes it was a little too tight. 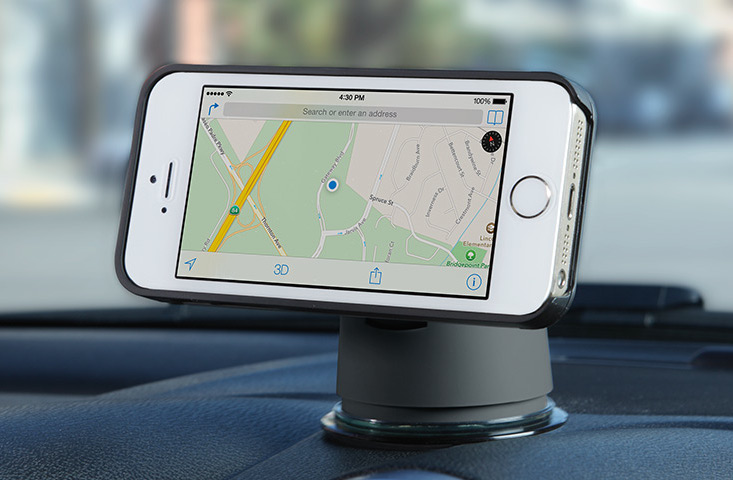 The windshield mount, called [+] Drive, is made with the strongest suction cup system I’ve ever used, and I’ve tested those double locking suction cup mounts. I seriously worried that I might break the glass.

The mount looks like a small cup with a suction at the base. When you “flip the lid” up, there is a twisting mechanism. Twist clockwise to secure the suction cup to a piece of glass or other non-porous surface. Let me put a warning on this. It is not easy to get the twisting mechanism to move. Thanks to the incredibly powerful suction, the thing is really hard to turn. After the first time I mounted it to my windshield, I never wanted to remove it. However, being a thorough reviewer, I decided I had to try it again. Luckily, the mechanism moved much easier the second time. It was still hard, but it didn’t almost break my wrist.

The lid that you flipped up to expose the twisting mechanism is the magnetic mount. You can move it back and forth any level to adjust the angle. However, it does not rotate on an axis, so you can’t move it from side to side. So, be sure the [+] Drive is where you want it when you lock it to your windshield. Then, stick your iPhone with the Case [+] to it for a solid mount.

I should point out that, in past experiences, I’ve learned that temperature affect suction cup mounts. Sometimes, they will dislodge from their surface simply because the glass expands and contracts when hot or cold. Where I live, the temperature ranged between 50 and 100 degrees during the testing period. The suction cups never gave away. However, I do not know whether extreme cold will have an effect on the strength of the suction. We’ll have to wait for winter to find out. 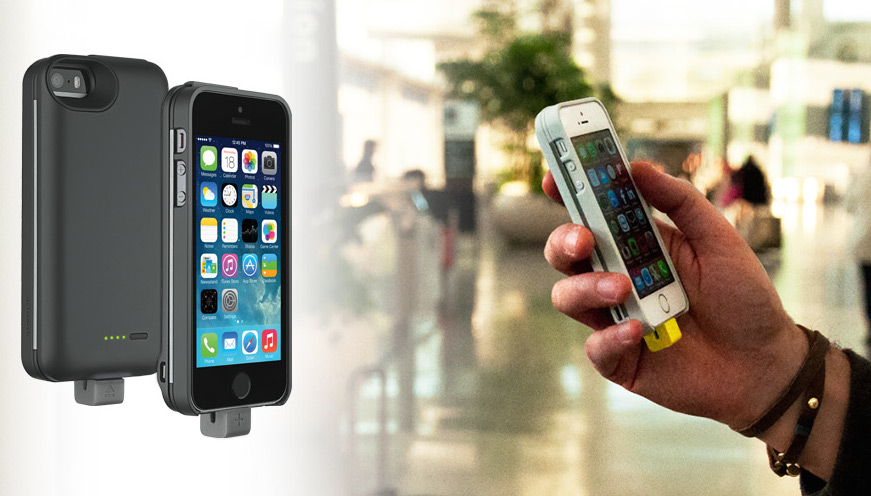 The only non-magnetic accessory that comes with this kit is the external battery charger case, called [+] Energy. It is a battery pack that mounts to the backside of the Case [+]. There is a Lightning connector at the bottom. All you have to do is plug the battery into your iPhone while the Case [+] is attached and it will become a fully functioning battery charger case.

I tested the [+] Energy with my iPhone battery at about 26 percent. It charged the device to full within an hour. Presumably, the battery will continue to charge your iPhone until it runs down. According to Logitech, the [+] Energy more than doubles the life of your 5s battery. I can’t wait to take this with me on camping trips so I can keep using the iPhone to play music hours after the battery should have died.

My favorite accessory in the Case [+] kit is the [+] Wallet. I keep my iPhone in a separate pocket of my fanny pack (yes, I use a fanny pack and I’m not ashamed to admit it). I was able to quickly access my ID, bankcard, and cash without having to pull out my wallet.

I was also very pleased with how well the windshield mount worked. I’ve had bad experiences in the past with suction cup mounts, but this one did not fail me.

The Case [+] itself is very tight. I put it on and took it off a couple of times and noticed that it was so tight that my Sleep/Wake button and mute button would scrape against the sides as I slid the case on.

The Case [+] and all its accessories come in at a hearty $199.99. I know you might be thinking that two hundred dollars is a lot to pay for an iPhone case. However, this is much more than just a protective cover for your mobile device. Each accessory by itself would cost a pretty penny, especially if you want quality, which Logitech is known for. If you think about it, you’re getting a bargain at $199.99.

I love the Case [+] so much that, if Apple really does come out with a new model of iPhone that is any different in shape and size than the current model, I might not get it. I’d rather keep my iPhone 5 or upgrade to the iPhone 5s than give up this awesome kit. It is the only case I’ll ever need and may have even made future generations of iPhones unwanted. Visit the company’s website to order yours today (as of writing this review, the Case [+] is out of stock, but you can place your order now).