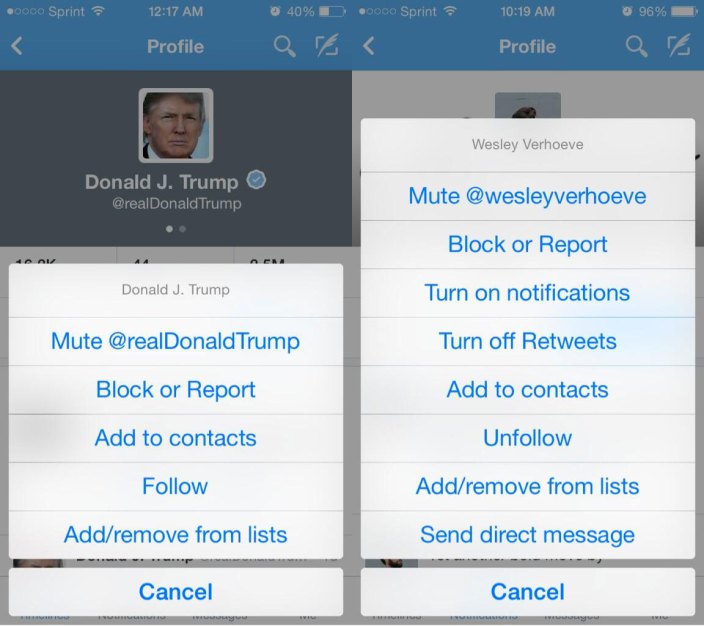 Twitter today posted an update for its iOS app, bringing it to version 6.5. The update brings about a handful of improvements for the iPad client, including a new design, photo and video previews for timeline, and easier access to DMs.

It also appears that Twitter has begun rolling out its new ‘mute’ feature to its web and mobile apps. Earlier this month the website was discovered testing the function with select users, but today it’s becoming available on a wider scale…

Changes to iPad include:

– Choose between “Top” and “All” Tweets in search results.
– Tweets with Twitter photos, Vine videos and other select content now show a preview in your home timeline
– You can reply, retweet, favorite or follow someone straight from a Tweet in your home timeline.
– Easier access to DMs
– Choose a filter for your photo.
– Refreshed look for navigation.
– Discover has been updated to show Tweets related to Trends.

In the same way you can turn on device notifications so you never miss a Tweet from your favorite users, you can now mute users you’d like to hear from less. Muting a user on Twitter means their Tweets and Retweets will no longer be visible in your home timeline, and you will no longer receive push or SMS notifications from that user. The muted user will still be able to fave, reply to, and retweet your Tweets; you just won’t see any of that activity in your timeline. The muted user will not know that you’ve muted them, and of course you can unmute at any time.

To mute a user from a Tweet in the iOS or web app, simply tap the ‘More’ icon and mute @username. You can also do it from their profile page by tapping the gear icon and choosing mute. At this time it doesn’t look like hashtags are mutable.

Of course, third-party apps like Tweetbot have long had mute functions, but it’s nice to see it make it’s way into the official client. If you’re not seeing it yet, don’t worry (neither are we), Twitter says that it could take a few weeks to roll out to everyone.

As always, you can find the latest version of the Twitter app in the App Store, for free. A Mac app is also available.