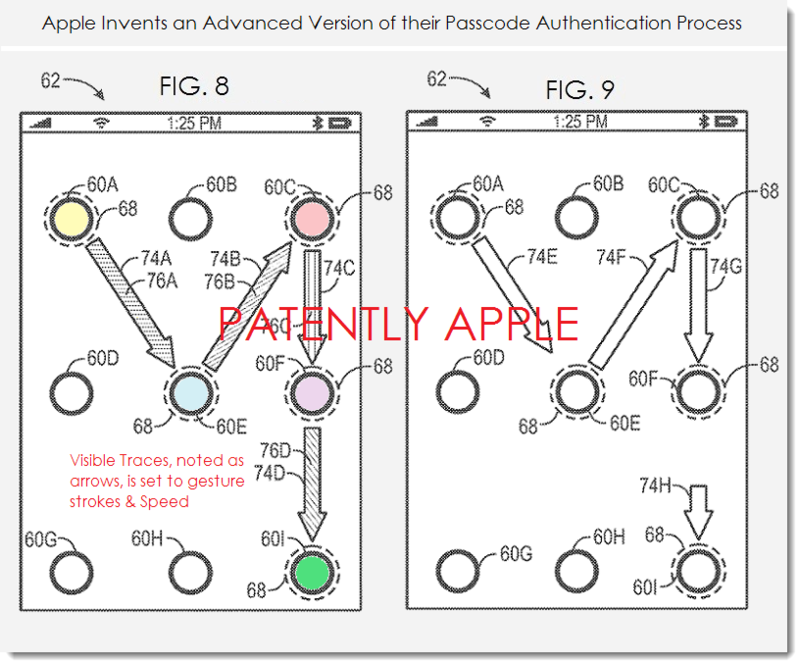 The US Patent and Trademark Office published a pair of interesting Apple patent applications yesterday. The filings are titled ‘Gesture entry techniques,’ and together they describe a device-unlocking feature that involves a user drawing a custom pattern on a screen by connecting illuminated dots.

Apple filed for the patent in late 2012, several years after Google introduced a very similar feature in Android. It would appear, though, that the iPad-maker’s version of the gesture-based password is at least slightly more advanced, as it can account for swipe speed, use of invisible dots, and more…

PatentlyApple has more on the two applications:

Apple’s invention generally relates to electronic devices, and more specifically to techniques for entering authentication gestures into electronic devices. Today’s invention revelations add to the secure measure of Apple’s Touch ID. Apple notes that the invention relates to the use of security measures based on non-alphanumeric inputs that are user configurable (as opposed to purely biometric inputs) to control access to restricted information or functions.

Again, Apple explains that users can utilize ‘invisible dots’ or tap other areas of the screen as part of their sequence to make their gesture passwords more secure. The system can also recognize the acceleration and deceleration of a finger swipe, as well as multiple fingers, further adding to its complexity.

Keep in mind that this is simply a patent application, submitted two years ago, and it’s not likely that we’ll see this incorporated into future versions of iOS. For one, Touch ID is expected to hit more devices this year, and don’t forget that Apple is currently suing Samsung over its ‘Slide to Unlock’ feature.