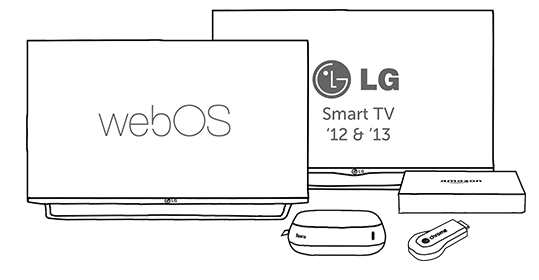 LG is hoping to make it easier for users to beam media to their televisions, with a new SDK it’s making available to developers to integrate into apps on iOS and Android.

Smart TVs have historically been one of the most closed platforms out there, with manufacturers developing features for only their own TVs and set-top boxes, and not the broader market – example being Apple’s AirPlay. LG is changing this with its new Integrate Connect SDK, a standard to place into mobile apps to beam media across multiple platforms onto the big screen.

“Connect SDK is an open source framework that connects your mobile apps with multiple TV platforms,” LG wrote on its website on Thursday. “Because most TV platforms support a variety of protocols, Connect SDK integrates and abstracts the discovery and connectivity between all supported protocols.”

LG’s SDK supports Roku, Chromecast, FireTV, webOS TVs, and some LG and Samsung TVs at launch, with plans for Apple TV support in the pipeline. The SDK doesn’t create a new wireless standard for communicating between TVs, but embraces all of them that are already out there.

Apps Plex and musiXmatch were named as launch partners for the SDK. However, given the SDK is new, it’s not clear what other third-party apps will support the standard. But the key for this to work, is a large adoption.

“TV by nature is a social device, and we’ve spent a lot of time thinking about the best way to extend a big screen experience to our mobile users,” Massimo Ciociola, CEO and founder of musiXmatc, said.  “The opportunity that is available with Connect SDK made the decision a very obvious one.”

With the Integrate Connect SDK, users will be able to beam video, audio, photos, YouTube videos, find media, control inputs, power on devices, set volume, change television channels, and more. LG’s website has a full list of all the features.