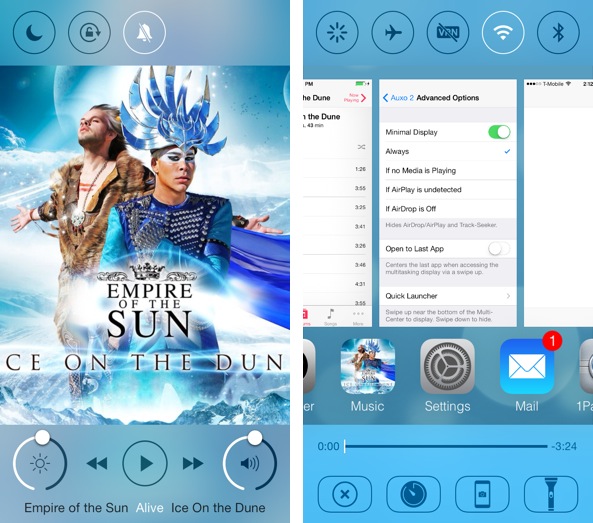 Don’t be fooled. Despite the fact that the latest update to Auxo 2 is labeled as an incremental 1.0.2 update, you’ll find quite a few fixes and enhancements in its change log.

One of the biggest complaints about Auxo 2 was that it lacked compatibility with popular tweaks like CCToggles and LockHTML3. That has all been remedied in version 1.0.2, which is available right now on Cydia.

I’ve taken version 1.0.2 for a test drive, and I’ve found a stabler and more mature Auxo 2. Have a look inside for the details.

Auxo 2 version 1.0.2 comes with quite the extensive change log and some of the changes include:

I took the update for a test drive, and as claimed, CCToggles worked right out of the box. CCToggles is the jailbreak tweak that allows you to customize a variety of the areas found in iOS 7’s Control Center, including the Quick Launch shortcuts and toggles. There are no options that you must enable to get CCToggles to play nice with Auxo’s Multi-Center, it just starts working.

Although I haven’t personally encountered many outstanding performance issues, the update did seem to make Auxo 2 a bit more stable and smooth when opening the Multi-Center and interfacing with album art. Of course, time will tell as to whether or not this update makes a huge difference for the contingent of users that have been vocal about lack of performance.

If you’ve already purchased Auxo 2, then v 1.0.2 is a free download that’s available today on Cydia’s BigBoss repo. Considering that the tweak debuted less than a week ago, I’d say that this is a pretty fast turn around time for an update with so many changes baked in.

What has your experienced been like with the latest version of Auxo? Have you noticed improved performance?