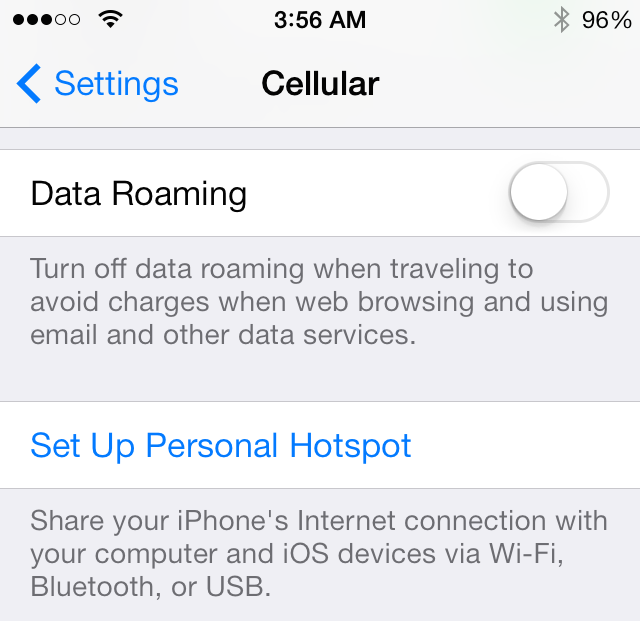 Folks having trouble with their Personal Hotspot feature in iOS 7.1 aren’t alone. A number of users have been complaining of tethering issues since installing the latest iOS update, as evidenced by this 16-page thread in Apple’s support forums.

Specifically, the problem seems to occur when trying to save custom APN settings in a device’s Cellular menu. Apparently you can enter information into the text fields, but the values don’t save and any attempt to make a connection errors out…

Looking at the various complaints in the support thread, first spotted by MacRumors, it looks like Apple has disabled users from setting up Personal Hotspot who are on carriers that either aren’t official iPhone partners or don’t support the feature.

So I talked with Apple, they said that the problem should be at my carrier. I phoned my carrier(Telenor Hungary) and I told them my story, they rejected me eith the reason that the problem is with the phone. I took my friends SIM card(T-Mobile) and I put it in my iPhone. Guess what, tethering was available and working.. Then I called my carrier back and told them my experience then they told me that the problem could be that they(Telenor) are not official sellers of Apple and in iOS 7.1 it became more strict, that devices wont connect to these networks. My quedtikn to you is that whether your carriers are official resellers or not. because for example my carrier apn settings are not pre-set in iDevices. :/

So the bottom line seems to be that Apple wanted to crack down on the unauthorized use of the Hotspot feature, which isn’t surprising. Unauthorized tethering has long been a sore spot for carriers, who have been going after culpable users for years.

Apple released iOS 7.1 on March 10 following a lengthy beta period. The update features a number of changes including CarPlay support, Siri and Touch ID enhancements, and both UI and performance tweaks. It also disables the evasi0n7 jailbreak.