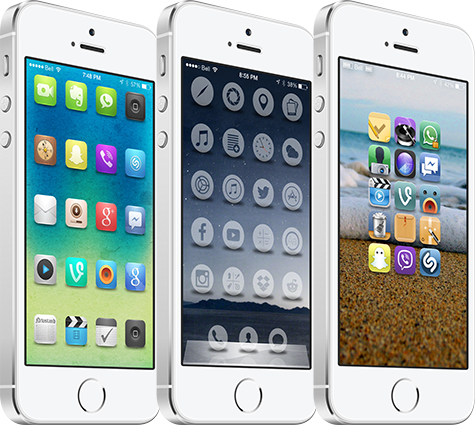 We’re back with the seventh edition of Theme Thursday, a weekly column that promotes some of the best Winterboard theme releases for iPhone, iPad and iPod touch. This column has mostly been experimental up until this point, as we continue to gauge the feedback from our readers. What we heard last week was that many of the themes looked very similar to each other, so this week we’ve tried to make things more unique…

In addition to sharing some of the best themes out there, we’ve gone ahead and customized the layouts a little further using Springtomize 3 and HomescreenDesigner. For those unfamiliar, the popular jailbreak tweak allows you to customize everything from the dock and status bar to icons and folders. Our own Jeff Benjamin gave Springtomize 3 a strong recommendation in his review of the tweak a few weeks ago, and I echo those sentiments.

We also dug a little deeper this week to discover some of different looking themes available on Cydia, and the results were favorable. This week, we are pleased to present you with Newport for iOS 7, Trima HD and Lucid. Hopefully these themes provide more options compared to some of the lookalikes we covered in the sixth edition. Let us know what you think in the comments section down under. 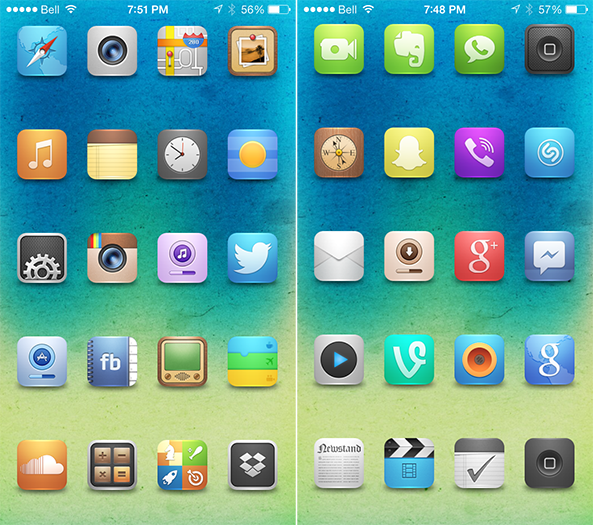 Graphic designer Trent Morris has released his highly-awaited theme Newport for iOS 7. In case you didn’t know, Newport has been a staple in the theming community for several years because of its beautiful, detailed icons. I’m a big fan of themes with a bright and vibrant color palette, as opposed to ones that use dark shades, and that is a big reason why I highly recommend this one.

Newport for iOS 7 is available now for $2.99 on the Cydia Store. I do feel that this price tag is justified, but there are certainly other quality themes that are less expensive or free. Soft Remix and Space Blueberry, I’m looking at you. To achieve the layout in the screenshots above, I have used Springtomize 3 to resize the icons to 90% and hide labels. Last, I have hidden the dock and page indicator dots. 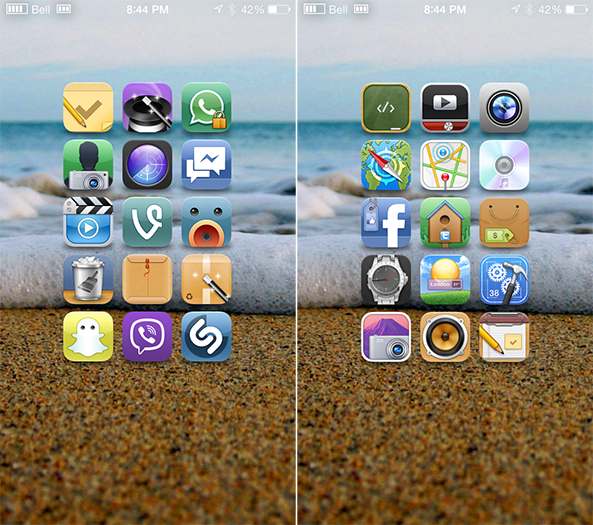 This is a theme that was recommended by several iDownloadBlog readers in last week’s edition of Theme Thursday, and deservingly so. Trima HD is another detailed icon set with a vibrant color scheme, and it also makes slight changes to the status bar and other areas of the iOS user interface. My only complaint is that it is sometimes hard to recognize which apps are which. There is definitely a learning curve associated with the themed icons. Trima HD is on Cydia for 99 cents.

To achieve the layout above, I have been experimenting with a well-known jailbreak tweak called HomescreenDesigner. The tweak allows you to drag and drop icons wherever you would like on the home screen, but it has a number of bugs that make it hardly worthwhile. App icons appearing in the launch pages of loading apps is just one of the problems I encountered. I was also sent into Safe Mode multiple times, making it safe to say that I will be avoiding this tweak for now. 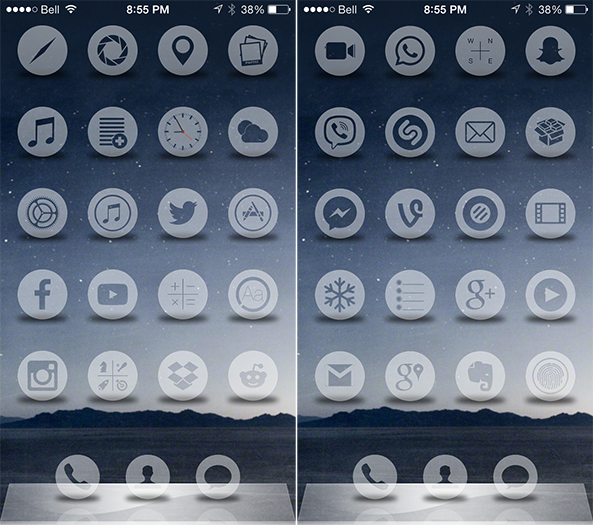 In the inaugural Theme Thursday, we covered a theme called 7ransparency Hue for iPhone and iPod touch. Six weeks later, we introduce an alternative called Lucid that uses a circular mask for the icons instead. Both themes are good options if you are looking to break away from the traditional look of the home screen, or the white glyph on a square icon look that most other themes have. Just don’t expect non-themed icons to look any good whatsoever. Lucid is on the Cydia Store for 99 cents. Thanks to John Holmes for the heads up.

That wraps up this week in Winterboard theme releases. As always, we appreciate any recommendations in the comments section down under. If we like what we see, it could be featured in Theme Thursday next week. I also encourage theme makers to connect with me on Twitter (@rsgnl) to have your work promoted in this roundup. Paid themes can be gifted to Cydia ID 6107077 for coverage consideration.

What theme are you using?