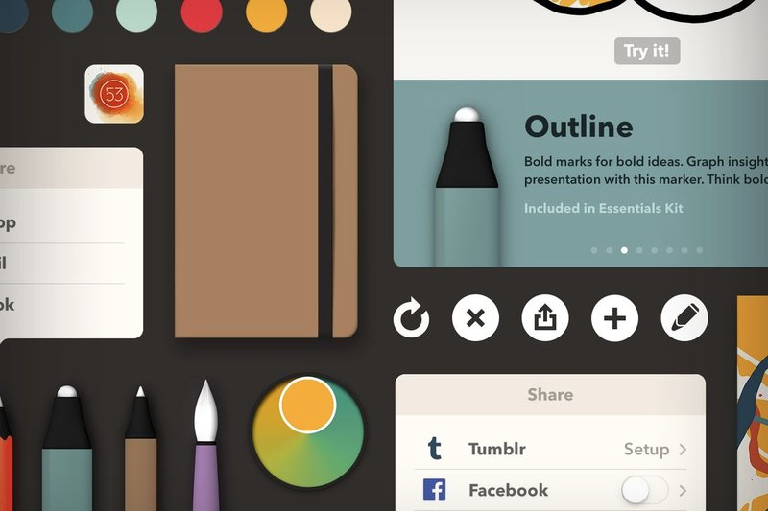 FiftyThree announced a significant update for its popular Paper for iPad drawing app this afternoon, bringing the app to version 1.6.1. The update brings about an iOS 7-inspired redesign with new fonts, buttons and toggles, as well as a handful of other improvements.

Among those improvements are more powerful zoom and ink—when you zoom in on your artwork, your tools do too, giving you finer control over the smaller areas—and better dot control. Now, the dot size in your Draw and Erase tools is linked to how long you press…

Here are the release notes on 1.6.1 from FiftyThree’s blog:

Paper is now built for iOS 7. It’s the same Paper creators around the world know and love with a fresh new look to improve readability to keep you in your creative flow. You’ll find faster menus, simplified icons, lighter colors, journal covers that pop, custom typefaces, and overall improved readability. It combines the emotional power of metaphor and the functional clarity of clean design. In other words, we’ve polished every pixel.

Zoom isn’t just about getting closer, it’s about having the tools to do detailed work. Now when you zoom in, your tools do too. Draw, Color, Erase, and Blend adjust their size in the loupe to give you finer control over tiny areas without ever touching a slider.

Master the dot. Dot size in the Draw and Erase tools is now linked to how long you press. Tap quickly to make small dots, or hold down longer to create bigger ones. Starry skies and spotted cows are now easier to draw than ever.

For those who aren’t familiar with the app, Paper gives you a canvas to capture your ideas as sketches, diagrams, illustrations, notes or drawings and share them across the web. And it’s won countless of awards for its design, including an Apple Design Award at WWDC in 2012.

If you’re a current user not seeing version 1.6.1, give it a minute, it seems like the update is still rolling out. And for those of you who don’t have the app already, you can find Paper for the iPad in the App Store for free. Warning: some tools are locked and tied to in-app purchases.