A high-profile source in the watch-making biz has stepped forward with a rather surprising assertion that Apple may be looking to build its rumored iWatch in Switzerland, the home to world’s finest watchsmiths.

According to the source, Apple’s created a company in Switzerland for this purpose.

In fact, one industry executive claims Apple has already placed orders with subcontractors in a bid to market its rumored wearable device as ‘Swiss Made,’ a label used to indicate that a product was made in Switzerland, similar to the ‘Made in USA’ label, or ‘Made in China’ for that matter…

According to iGen.fr (Google translate), in response to questions by the PME Magazine, Biver remarked that Apple had approached him and other Swiss companies concerning a ‘Swiss Made’ iWatch.

The Cupertino firm, to paraphrase Biver, apparently tried poaching a bunch of people working for big watchmaking groups, including his own.

For what it’s worth, The Financial Times said last July Apple was aggressively hiring engineers and designers after facing “hard engineering problems” it couldn’t solve by itself, prompting the company’s leadership to look for outside help. 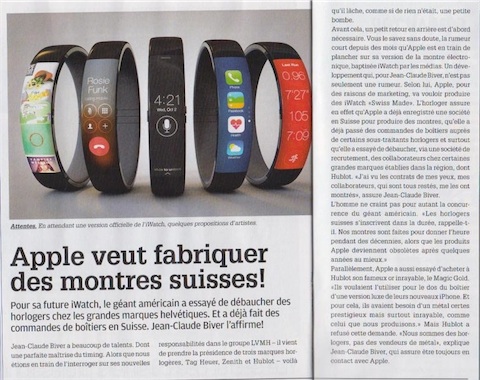 The PME story also mentions Apple failed in attempting to license Hublot’s metal processing technology called Magic Gold to use for “a luxury version of the iPhone”.

Here’s how Hublot itself describes the scratch-proof tech:

The fruit of several years of research in collaboration with EPFL’s metallurgy department, Hublot has created a veritable “fusion” between pure gold and boron carbide (a ceramic).

The brand has obtained an alloy of 18 carat gold surpassing traditional gold alloys in hardness and scratch resistance, while conserving the best properties of the ceramic and the gold.

During the polishing, the raw alloy changes from a nearly black color to a unique gold tint, earning it the name “Magic Gold”. Exclusively produced in the Hublot manufacture, Magic Gold is the forerunner of a new era for alloys of precious metals.

Of course, Apple would later release the iPhone 5s in gold.

Apple’s invested north of $500 million in a Mesa, Arizona plant which is about to start producing sapphire crystal laminates on an industrial scale. Apple has not said why it needs a sapphire plant, prompting pundits to speculate that the material could be used to strengthen the iPhone’s cover glass so it’s far less prone to breaking.

As LVMH owns watch brands TAG Heuer and Zenith – and Biver himself is also the Chairman of Hublot,  another LVMH subsidiary – you’d be forgiven for assuming he knows industry gossip inside out.

If I were you, I’d take his claims with a huge grain of salt.

For starters, this particular executive is well-known for being almost too good at creating buzz. For all we know, he could have made this all up just to get the name of his company out there.

It would be pretentious to think that this kind of watch would fail to compete with Swiss watches. But they will in any case clearly not be competing with the high-end Swiss watches, which account for most of the exports.

He also owns shares of Apple.

On a somewhat related note: in succumbing to the pressure from the Swiss Federal Railways SBB, Apple in 2012 agreed to pay to the tune of $20 million for design rights to use the SBB’s trademarked clock face in its iPad Clock app in iOS 6.

As for a ‘Swiss Made’ iWatch, let it be known that the Swissness of a watch is dependent on the brand and reputation. That being said, however, Apple may not be able to use a ‘Swiss Made’ label by virtue of building the product in Switzerland alone. 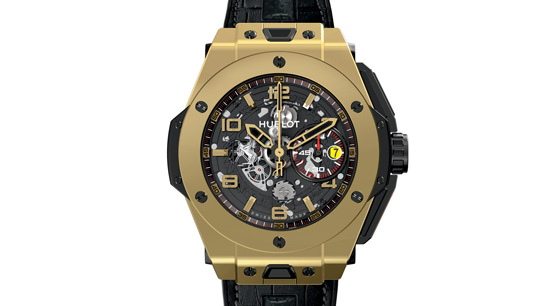 There’s actually a law that regulates the use of the moniker on products.

It precisely specifies that a watch movement shall not be considered ‘Swiss Made’ unless it’s encased in Switzerland – at least the last wheel must be added in the country – with the manufacturer carrying out the final inspection in Switzerland, too.

The law goes on to specify the conditions for the use of the name ‘Swiss’ on everything from watches and watch movements to cases, dials and replacement parts.

However, the definition itself has been somewhat diluted due to the requirement that the components of Swiss manufacture account for at least 50 percent of the total value of a ‘Swiss Made’ watch (excluding assembly costs).

Even some of the top wristwatches are being assembled in China for export to North America, Asia and even Europe, where customers don’t care much about the ‘Swiss Made’ seal of quality.

So to answer the main question in the headline: no, the iWatch most likely won’t carry the ‘Swiss Made’ label as the device should be all electronics.

There’s simply no reason to adhere to the ‘Swiss Made’ principles which are laid out for wristwatches. Again, the iWatch should have no movement mechanics, unless Apple has been taking us all for a ride and the media has been grossly mistaken in its predictions.

This isn’t saying Apple didn’t at some point considered marketing the iWatch as ‘Swiss Made’ – it probably did. And if so, there’s a good chance the company inquired about it, in turn prompting folks in the watch-making industry to speculate.

If anything, the iWatch will be ‘Designed in California’ and ‘Assembled in China’, just like the iPhone.

Besides, last we heard the iWatch won’t be a smartwatch at all.