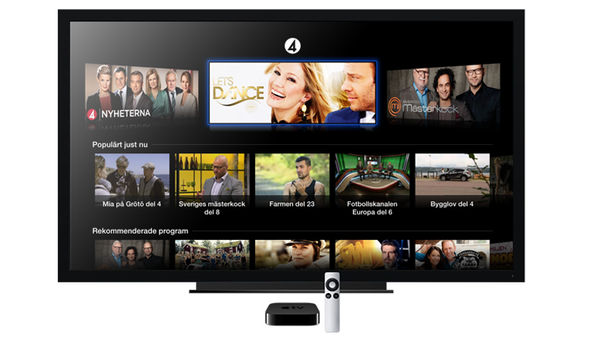 Apple has added another new channel to the Apple TV this morning for customers in Sweden. It’s called TV 4 Play, and it’s a streaming channel for the major Swedish television network TV 4 and it features both live and on-demand content.

That content includes live broadcasting, original programming, and full episodes of TV4 shows. Most of the content is available for free, but the network says that premium (paid) subscribers will have access to additional shows and movies…

Here’s the announcement from TV4 via (MacRumors):

With ‘TV4 Play’ on Apple TV, full episodes of current TV4 Group shows are available to watch for up to 7 days after their original air date. ‘TV4 Play Premium’ subscribers in Sweden can access an extensive library of additional content with most current and previously aired episodes available for a longer time period. The ‘TV4 Play’ experience on Apple TV also includes play queue support, easy access to a personalised list of favourite shows, and a “resume play” option allowing viewers to pick up watching an episode right where they left off. Select shows are available in HD only through ‘TV4 Play’ on Apple TV, with the number of available HD shows expected to increase rapidly over the coming months.

In addition to the TV4 Play, there are several other various other country-specific channels for the Apple TV, there’s Sky Sports in the United Kingdom, Watchever in Germany, CANALPLAY in France, and ABC for ATV users in the United States.