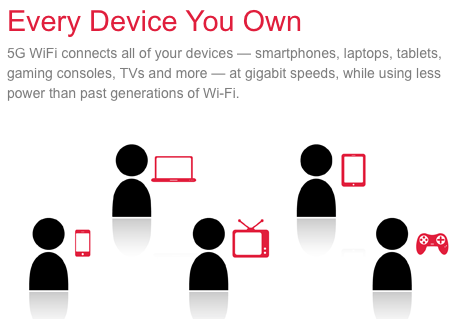 Imagination Technologies, the fabless British semiconductor maker, yesterday at Mobile World Congress detailed its new PowerVR graphics which outperforms Nvidia’s Tegra K1 platform and is a likely candidate for the next iPhone’s GPU. And now, another premium silicon vendor has announced a chip that could just as easily find its way into future iOS devices.

I’m talking about Broadcom, whose Wi-Fi chips and other controller components are used in the iPhone 5s and iPad lineup. The Irvine, California based firm announced at Mobile World Congress a new fifth-generation 802.11ac Wi-Fi component which doubles data throughput and increases Wi-Fi coverage by up to 30 percent.

Should Apple choose to tap it, the iPhone 6 and the next iPad will adopt Gigabit Wi-Fi aka 802.11ac, the latest and greatest standard in wireless networking for the consumer market…

In general terms and compared to the previous generation, 802.11ac from Broadcom can deliver download speeds up to three times faster than existing networks, plus power efficiency six times greater “than in most mobile devices”.

A few high-end Android devices that support 802.11ac include Samsung’s Galaxy S4/S5 and HTC’s One.

The new chip also features 2×2 MIMO (Multiple Input Multiple Output) so future smartphones can take advantage of Broadcom’s much enhanced beamforming technology which improves range and performance in congested environments. For those wondering, the Galaxy S5 supports both 802.11ac and 2×2 MIMO Wi-Fi.

In a nutshell, MIMO is a smart technology that taps multiple antennas which send out parallel signals at both the transmitter and receiver, thereby improving communication performance.

Making do with single-antenna connection, which is found in most smartphones today, means that Wi-Fi reliability takes a hit. In some cases, that connection can be impacted by how and where people physically hold their devices.

I haven’t heard the ‘you’re holding it wrong’ meme in quite a while.

Be that as it may, MIMO promises to solve this issue by using multipath communication, which increase the likelihood of a strong Wi-Fi signal, “regardless of how the phone is held” or the obstacles that might be in the way.

More obvious is the improved connectivity in crowded venues – such as concerts and sporting events – where large groups of people are simultaneously tapping a single Wi-Fi network with their devices. MIMO helps the signal fight through the congestion, which allows users to experience faster uploads and downloads.

The chip takes care of converting multiple signals into a single, clear channel. 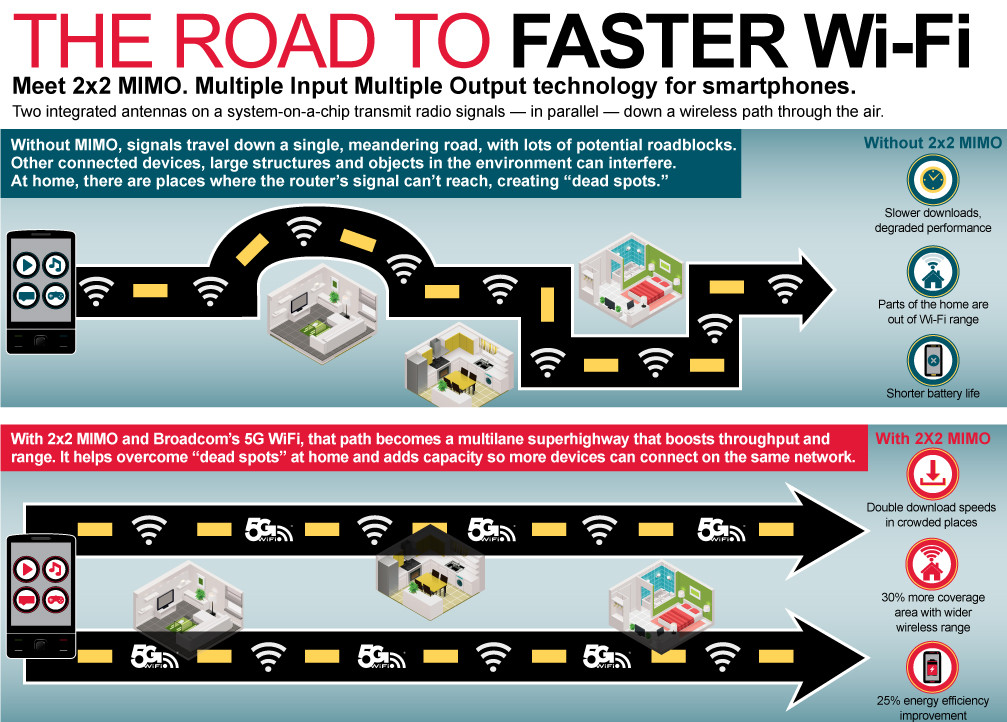 The iPad Air has two antennas to support MIMO.

To learn more about Broadcom’s new solution, check out their blog.

The faster 802.11ac Wi-Fi networking is now commonly found on Apple notebooks and desktops, with the mid-2013 MacBook Air first adopting the technology and then followed by the refreshed AirPort Extreme and Time Capsule wireless appliances. 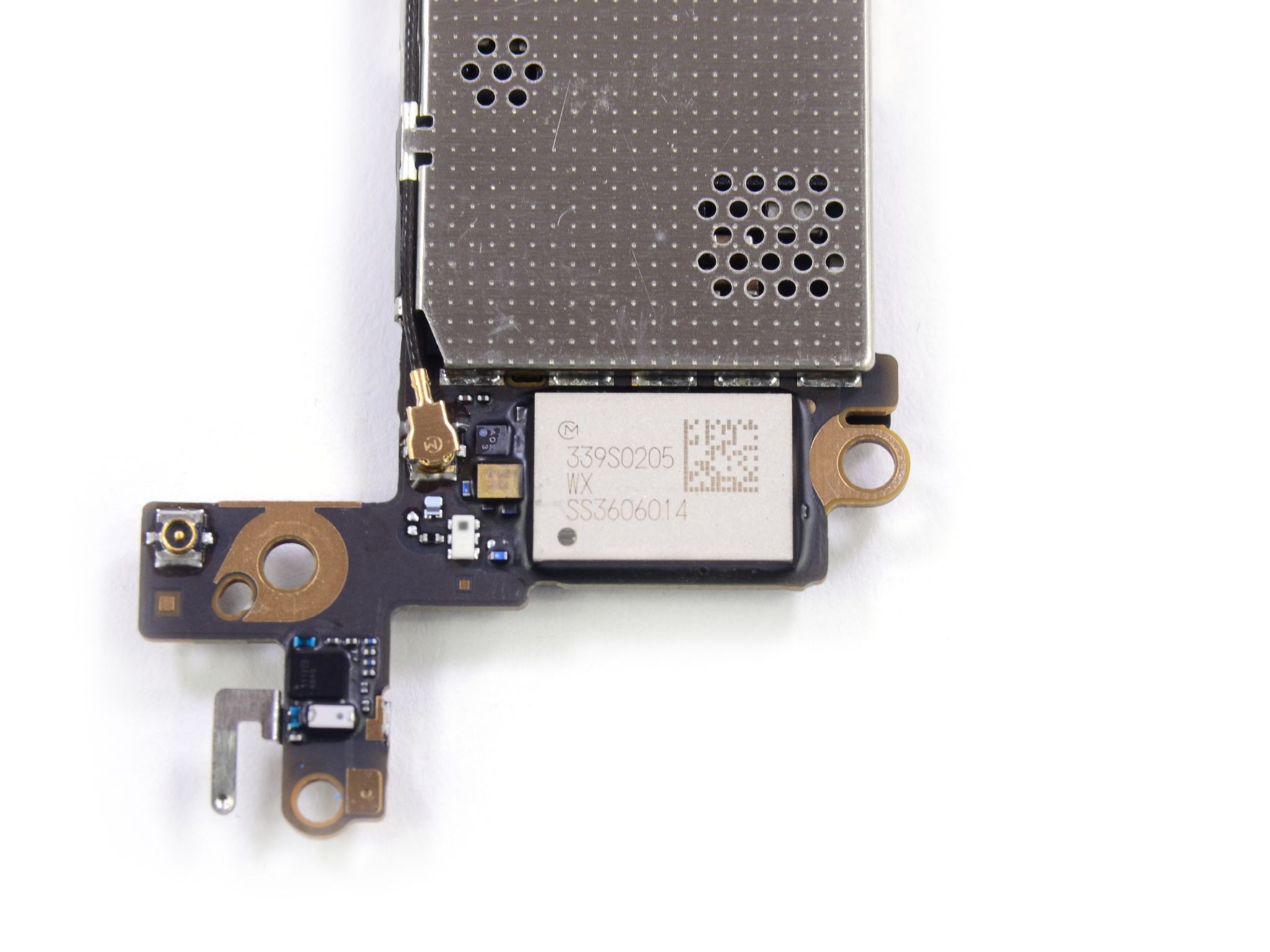 The iPhone 5s uses a Murata 339S0205 Wi-Fi module, which Chipworks identified as being based on the Broadcom BCM4334 chip. Image source: iFixit.

I’ll just go ahead and admit I was rather skeptical about 802.11ac.

That changed when a friend of mine invited me over to play with his brand spanking new AirPort Time Capsule. For those unfamiliar with the Time Capsule, it’s basically a cross between a 2TB/3TB storage and an 802.11ac base station. As I didn’t have benchmarking apps, I couldn’t put the old and new Time Capsule through their paces.

But without any doubt, I could instantly tell that the new Capsule is way faster.

This was also the case with my friend’s rusty old mid-2011 MacBook Air.

After connecting his machine to the new 802.11ac Time Capsule, network operations felt snappier and lag reduced. Hooking up my 802.11ac late-2013 Air to the base station, I myself was taken aback by the speed of common network operations.

Everything from copying multi-gigabyte movies over the local network to backing up my Mac to Time Machine felt markedly faster. I’m definitely looking forward to the next Apple TV with faster 802.11ac reducing AirPlay lagging to a bearable minimum.

And I want that nimble and responsive Wi-Fi experience on my next iPhone.

Hey, this dude needs justification to cough up $299 for a new Time Capsule!