As part of Microsoft’s rebranding of its SkyDrive cloud storage solution to the arguably much better “OneDrive,” the Redmond firm has set about something of a charm offensive. In an attempt to try and take users away from the hugely awesome Dropbox, Microsoft has already given away 100GB of free storage to the first 100,000 people to sign into the new OneDrive, but if you weren’t in on that action then fear not, because you can also snag 3GB of space for absolutely nothing. And that’s on top of the 7GB that they offer up right out of the gate.

In order to get your slice of the free cloud-based pie, all you need to do is install one of Microsoft’s OneDrive mobile apps – the iOS one, preferably – and enable one little feature. In all honesty it’s a feature you’re going to want to enable anyway, because Microsoft is giving away 3GB of free storage to anyone that turns on automatic uploading of their Camera Roll.

Now you may be saying the same thing that we said. Why would you want to do that if you already use Dropbox? Well, here’s why…

For starters, in order to get your free space all you need to do is enable the ‘Camera Backup’ feature in the app settings. That should be enough to see your OneDrive’s available space jump by 3GB. You can then turn it off should you so wish, and without penalty too. We’ve tried it on a few devices and our free space never went anywhere. So there’s that. But we’d argue that you might want to leave it turned on anyway.

As longtime fans of Dropbox and already having everything sat on their servers, including photos, we were skeptical about OneDrive’s chances of staying on our iOS devices. That was until we noticed one important feature: the app uploads photos automatically, in the background, without you having to launch the app. 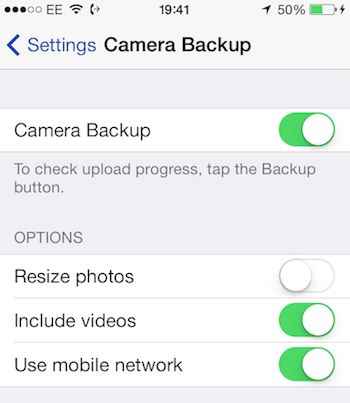 With the Dropbox iOS app as it is today, users need to launch the app in order for it to initiate an upload. That’s not the end of the world really. At least it isn’t until you forget and lose a bunch of photos because of it. With Microsoft’s OneDrive, the app – presumably using some iOS 7 voodoo – knows when there’s a new photo in your Camera Roll and then uploads it to your cloud storage. This obviously works for videos, too.

The downside is that the app still seems bound by the timeout that plagues the Dropbox app, meaning you’ll get a push notification when you’re trying to upload a large video or multiple photos and it’s simply run out of time before iOS kills it. Still, chances are you’re not going to run into that too often thanks to the fact it’s uploading images as you take them.

If you’re having problems…

Of course, as with most things in this life, it’s not all rainbows and unicorns here. We did notice one issue with getting that free 3GB of OneDrive space, and we’ve had multiple reports of other people experiencing the same problem. Namely, even though we installed the OneDrive app on three different iOS devices, it didn’t seem to track that we’d activated the Camera Backup feature and thus didn’t give us our free space. Thankfully, we worked out why.

Whether this offer is supposed to be for new OneDrive accounts or not, we’re not sure, but it seems that our issue was that we already had a “Pictures” folder in the cloud. The iOS apps were putting images and videos in there just as they should, but it appears that OneDrive needs to see the creation of that folder in order to give you your free space. Deleting that folder and re-enabling the backup feature saw that folder recreated and our free 3GB be added to our accounts. Bingo! We’ve had this verified by others who were experiencing the same problems, too.

Of course, if you already have files in that folder then don’t go deleting it. We’d suggest renaming it and letting the app recreate the folder before copying everything over or simply deleting the new folder and re-renaming the old one. Either way, don’t delete your stuff!

We’re pleasantly surprised with what OneDrive has to offer us iOS users, especially considering the amount of free space Microsoft has been throwing around. Until Dropbox updates its iOS apps to give them parity with Microsoft’s OneDrive offerings, then we’re truly torn as to which we prefer.

Right now? I am using OneDrive and then a Hazel rule on the Mac to copy stuff to Dropbox. Yes, really!