The carrier invited customers via email to switch to an iPhone 5s for $0 down as a “great offer for BlackBerry customers” because the Apple handset has the right tools “to do more”.

Judging by the amount and the intensity of backlash, it wasn’t T-Mobile’s finest moment: after all, it doesn’t take a rocket scientist to figure out that the struggling Canadian smartphone maker owns one of the most loyal and ardent following out there, the types of people who are especially sensitive to anything related to Apple…

According to a report by N4BB, BlackBerry fans accused T-Mobile of disrespecting and trolling them with distasteful marketing. The nation’s fourth-largest carrier was taking lots of heat and eventually the pressure from fans worked – yesterday, Legere back-pedalled and said he would work with his team to come up with a better offer.

“BlackBerry users, I’m hearing you loud and clear,” he wrote on Twitter. “Let me work with the team and get back with you,” reads the tweet. Another tweet pledged T-Mobile’s support for BlackBerry customers, saying “we give our customers choices, but you don’t have to give up loyalty”.

I’m surprised that no one in T-Mobile’s marketing didn’t say something along the lines of ‘hey, maybe we should treat BlackBerry fans to Q10 upgrades or something’. 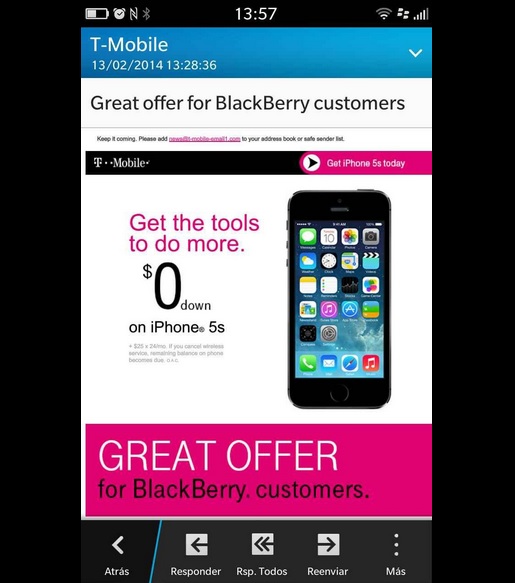 In reality, T-Mobile was simply responding to market forces.

As per IDC’s latest global estimates, BlackBerry’s share of the smartphone market has fallen below the collective ‘Others’ category, having ended last year with just 0.6 percent of the market.

But from March 2008, RIM’s share has been steadily declining. By July 2012, it fell out of IDC’s ranking of the top five global smartphone makers by market share for the first time.