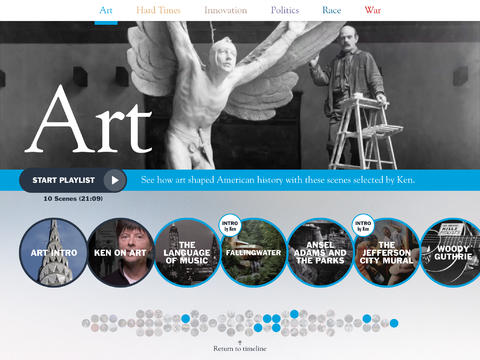 Documentarian and movie director Kenneth Lauren “Ken” Burns is well-known for his style of using archival footage and photographs and giving them life by slowly zooming in on subjects of interest and panning from one subject to another.

This technique became known as ‘The Ken Burns effect’ and you’ll find it in Apple’s iPhoto, iMovie and Final Cut Pro X apps and many other software applications.

Today, Ken’s out with a new namesake iPad app, now available free in the App Store, which gives you access to streaming videos containing extras, behind-the-scenes and other footage from all 25 of his films, such as The Civil War, Baseball and Prohibition…

“This app is not a collection of Ken’s filmography,” according to release notes. “It’s an entirely new way of looking at American history,” and it’s only available on iPad.

Your Retina screen is used to the fullest so all videos look fantastic.

There are three main views in the app: 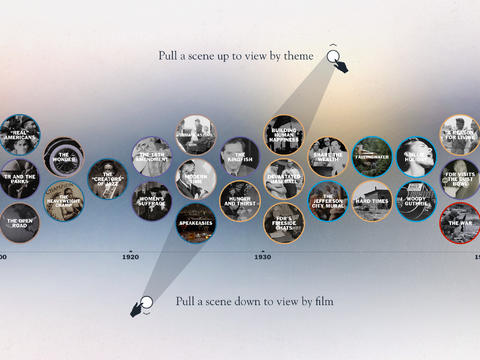 I like that he praised the Mac and Apple in an interview with The Hollywood Reporter:

Apple has long used an element of my filmmaking in its programs, which they call the Ken Burns Effect. I’m so excited to now be using Apple’s platforms to create a radically new way to present my work and reach new viewers.

Our films are made in a small town in New Hampshire over many years, with images and stories woven together in a way that we hope brings experiences of the past into the present.

Download Ken Burns free of charge in the App Store.

The free download includes one playlist around the theme of Innovation. Five additional playlists are available as a one-time $9.99 in-app purchase.

It’s an iPad only app and iOS 7.0 or later is required.