Unless you’ve been sleeping under a rock lately, you must have heard about a phenomenon that is Flappy Bird, a silly and addictive game that set tongues wagging even before its controversial removal from the App Store last night.

A lot of people thought that Flappy Bird creator Dong Nguyen announcing the app’s removal from the App Store was a marketing move, even after he followed through with his promise. And who can blame them?

I mean, who in their right mind would kill a golden goose that in Nguyen’s own words was bringing a cool $50,000 per day from in-game advertising, right? Nguyen on his part would only say the sheer publicity from the game had “ruined his simple life” by attracting too much attention from the press and disgruntled players.

Although some sympathized with Nguyen, others suspected Nintendo was responsible for killing Flappy Bird over certain graphics similarities with its Mario franchise. Surprisingly enough, Nintendo in a rather unusual move went on the record to specifically dispute the notion and assure Flappy Bird fans it had nothing to do with the app’s removal…

Speaking with The Wall Street Journal, Nintendo spokesman Yasuhiro Minagawa said his company did not complain to Apple over some design similarities between Flappy Bird and the Mario series.

“While we usually do not comment on the rumors and speculations, we have already denied the speculation” last week, he [Yasuhiro Minagawa] said.

Nguyen, who lives in Vietnam, said on Twitter that his decision to remove the game from Apple’s App Store and Google’s Play store wasn’t related to legal issues.

“I just cannot keep it anymore,” he wrote.

In case you haven’t heard, iPhones with Flappy Bird pre-installed are getting bids for $99,000 on eBay, how crazy is that? I’ll tell you what’s crazy, that Nguyen on Twitter received suicide notes and dead threats following the game’s removal!

Press people are overrating the success of my games. It is something I never want. Please give me peace.

Those of you who can’t get over this, try out Nguyan’s Super Ball Juggling and Shuriken Block, both available for free in the App Store? Now that the addictive game is dead, it’s obviously a great time to be a Flappy Bird copycat. 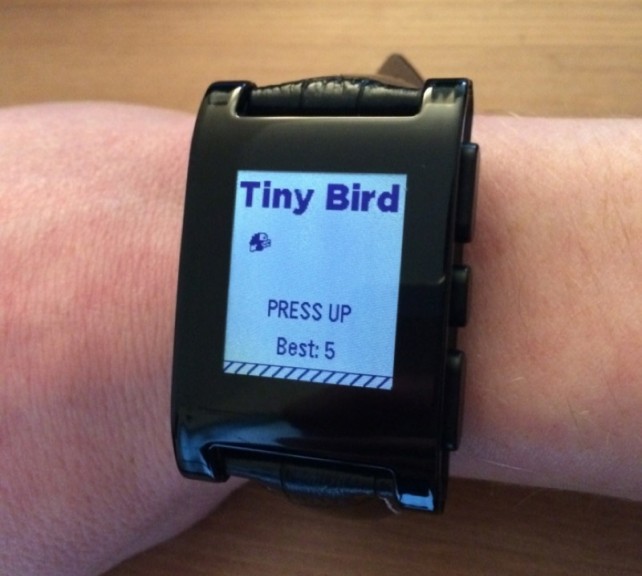 Bloggers are highlighting a bunch of alternatives, including the now #1 free game Ironpants and a HTML5-based browser version of Flappy Birds (and another one here).

For even more alternatives, visit Google.com.

There’s even an unofficial Flappy Bird port for the Pebble, available as a free download in the Pebble Appstore under the name Tiny Bird, depicted above.

Wouldn’t we all be this successful?

The game had been downloaded over 50 million times prior to its removal.