We’ve seen multiple reports over the last few weeks claiming to have knowledge of iPhone 6 features. The consensus seems to be that Apple’s next smartphone will come in two sizes, 4.8-inches and 5.5-inches, and offer up a variety of performance bumps.

And today we’re adding a new report to the stack, from analysts at KDB Daewoo Securities Research. In a note issued to investors last week, KDB agreed this year’s iPhone will come in two sizes, and said it will feature IGZO technology, 2GB of RAM and more…

Here is a breakdown of the analysts’ iPhone 6 predictions (via BGR): 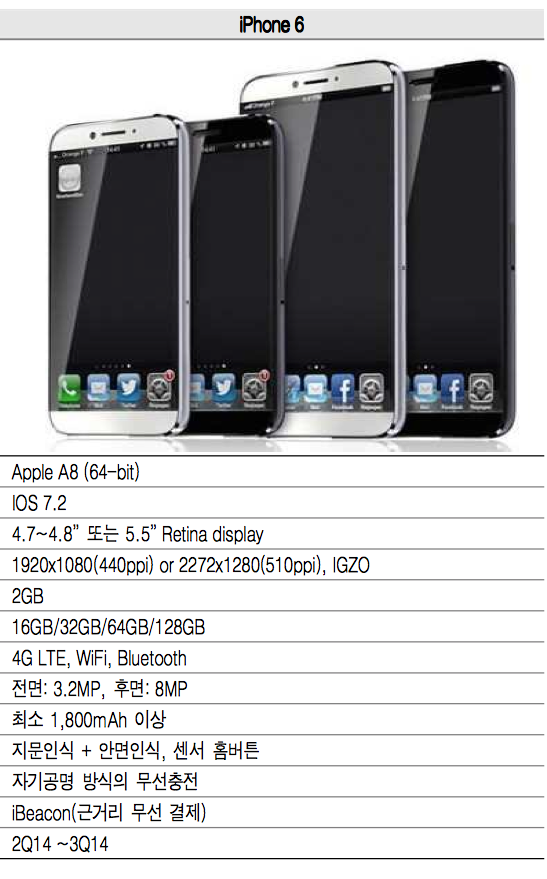 It’s worth noting that some of these details match up perfectly with other consistent reports. There’s the aforementioned dual display sizes of 4.7″ and 5.5″, the 8MP iSight camera—which we’ve also seen a few times now, and of course there’s the A8 processor.

While IGZO tech and a 128GB storage option are plausible, since we’ve seen both in the iPad line, the call for the iPhone to be on iOS 7.2 at launch seems way off. Apple’s handsets have always launched with major software updates, which this year would be iOS 8.

Nevertheless, it’s interesting that we’ve seen so many of these detailed reports on the iPhone 6 already, and it’s only February. And it’s even more interesting that, despite these reports all being from different sources, some big aspects from them continue to line up.

Last month, Foxconn was reported to have 100 iPhone units with sapphire glass displays in trial production.