In an effort to fend off T-Mobile’s ‘Un-carrier’ attack, and stay competitive with Verizon, AT&T announced a new set of family plans this afternoon. The plans include unlimited talk and text and then a bucket of 10GB of data that can be shared by all of the accompanying devices.

But the big news here is the pricing. AT&T is saying that these new plans come with the best-ever prices, and at first glance, they do look appealing. For instance, the entry-level option costs just $130 per month with unlimited talk, text and then 10GB of data for 2 smartphones…

Here’s a full breakdown of the pricing:

And here’s an excerpt from the press release:

“Get ready to take advantage of AT&T’s1 (NYSE:T) best-ever prices for people wanting a family-size bucket of data and unlimited talk and text on the nation’s most reliable 4G LTE network.2 As an example, a family of four can now get unlimited talk and text, and 10GB of data – enough for the whole family to share – for $160 a month.

These best-ever prices on AT&T’s best-in-class network are available beginning tomorrow to any AT&T customer, including small businesses with up to 10 lines, and customers of Verizon, Sprint, T-Mobile and other wireless carriers who switch to AT&T.”

So how do these ‘best-ever’ prices compare to the other guys? Well they aren’t good enough to beat T-Mobile, which offers unlimited data for two smartphones for $100/month. Sprint and other regional carriers are also cheaper. But let’s compare it to AT&T’s biggest competitor: Verizon. 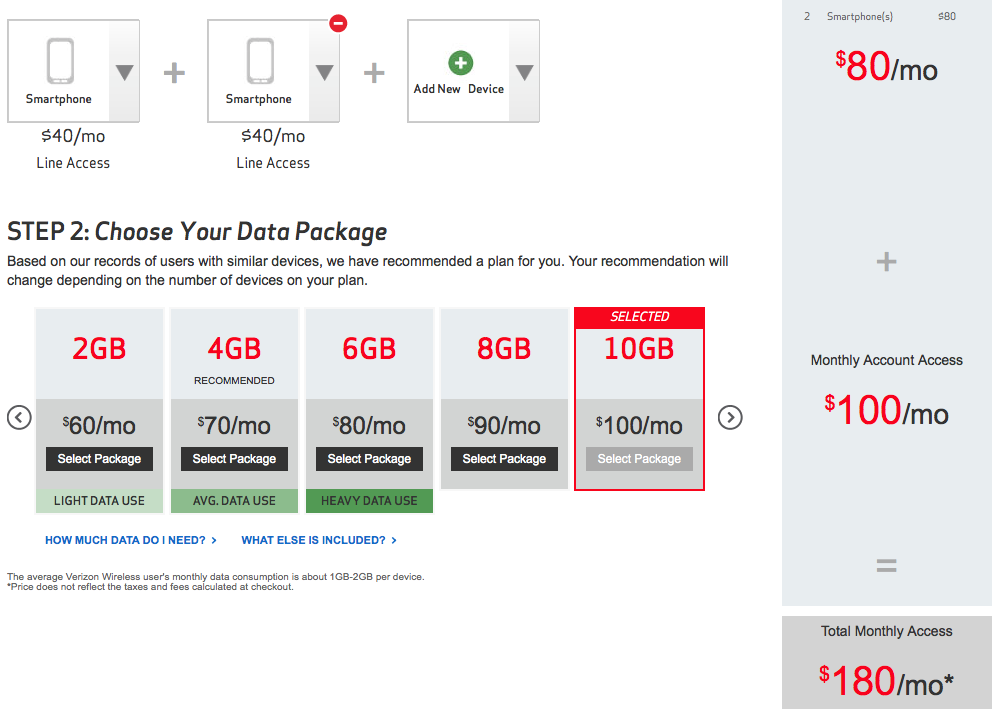 As you can see, AT&T’s new 2-line smartphone plan is $50 cheaper than the Big Red carrier. They both give you unlimited talk and text, and 10GB of data per month, and the two companies have comparable nationwide LTE networks—well, more comparable than say Sprint or T-Mobile.

So should you switch? That answer will vary from person to person. But AT&T is nearly finished with its LTE rollout, which has consistently been rated the fastest in the country, and is now offering competitive plan pricing and $100 per-line bill credits. It’s certainly worth looking into.