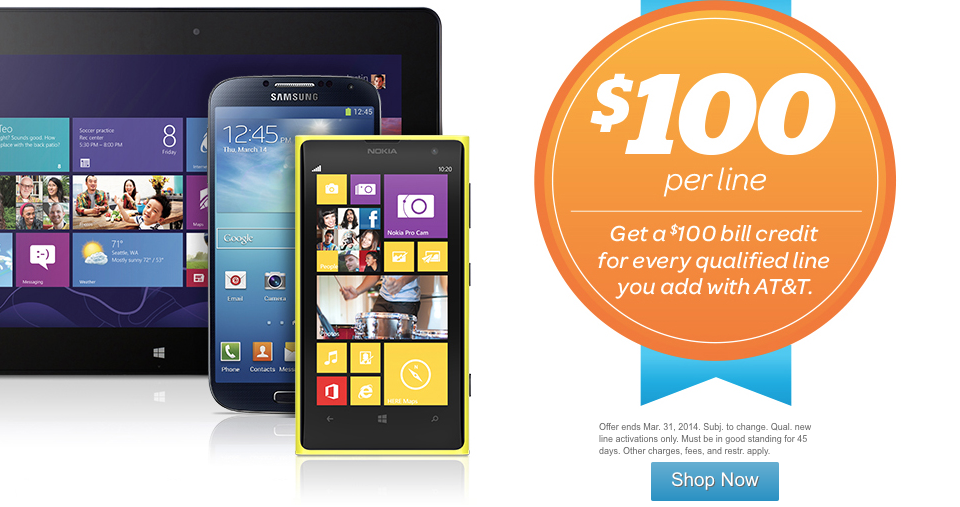 Apparently in response to T-Mobile’s ongoing Un-carrier initiative, the second-largest U.S. carrier, AT&T, on Wednesday announced a new time-limited promotion that incenitivizes both existing and new subscribers with a $100 credit.

Customers are invited to activate a qualifying wireless line for any smartphone, feature phone, tablet, wireless home phone, MiFi puck or other connected device to claim their $100 bill credit per each line…

AT&T said that credits will be applied within three bill cycles.

It’s not just a reward of sorts for existing customers: AT&T is hoping the promotion will attract other carriers’ customers. Marketing boss David Christopher openly called it “an incentive for customers of Verizon, Sprint, T-Mobile and other wireless carriers” to jump ship.

More information about this promotion is available at AT&T’s website.

You account must be in good standing for 45 days and other charges, fees and restrictions may apply, including the $36 activation fee and early termination fee up to $325. Also, GoPhone, Machine-to-Machine, Enterprise on Demand and activations on BusinessConnect plans are excluded from this promotion.

This is a time-limited thing: you have until March 31, 2014 to take advantage of it.

In other AT&T news, BGR reports that the carrier may be willing to re-negotiate the wireless service cost on a per-customer basis in the wake of T-Mobile’s Un-carrier initiative.