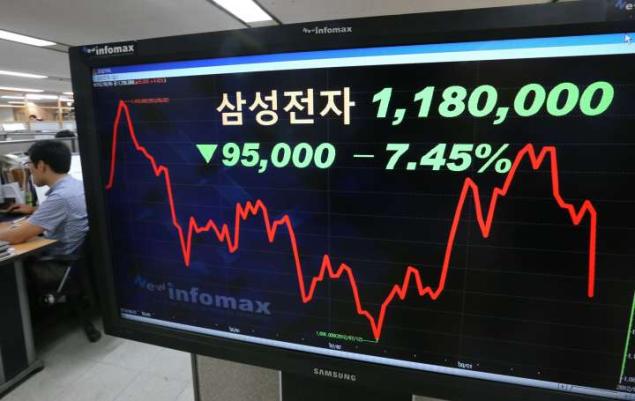 Things are not happy and beautiful any longer for Samsung, the world’s number one smartphones manufacturer. As reported by Bloomberg, the Korean giant has posted its slowest growth since 2011.

Who’s to blame for the slow growth pace? For one, there is Lenovo, Huawei and other makers of cheap smartphones who’ve been flooding the markets in many areas, especially in Asia, a strong ground for Samsung. Apple is also partly responsible from Samsung’s decline as the fruity company has been luring high-end customers away from the Galaxy line maker…

The news will probably feel like a bucket of cold water thrown on the Korean company which has been riding high on its status of number one for a while. Sometimes, being number one doesn’t really matter if you can’t keep these profit margins high, and that’s exactly what Samsung is realizing right now.

Fourth-quarter operating income at Samsung’s mobile unit, the company’s biggest profit driver, was 5.47 trillion won, little changed from a year earlier and down from a record 6.7 trillion-won profit in the quarter ended Sept. 30, the company said.

The company said it “planned to lower its mobile marketing spend this year relative to revenue, after big promotional spending hit fourth-quarter profit,” reports Reuters. Maybe it’s a not a bad thing?

On the other side, Apple is expected to have shipped a record 55 million iPhones during last quarter. We’ll get confirmation next week as the company will report its Q1 financials.